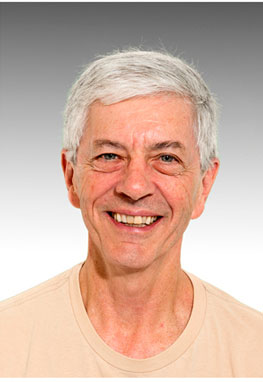 Greg Mountain, a professor from Rutgers University (Department of Earth and Planetary Sciences), is on the JOIDES Resolution to correlate the cores. We drill several hundred meters into the ocean bed but each core is 9 m long. The top and bottom of this length can get disturbed so to ensure we get the full picture of how the sediment changes as we get deeper we drill three parallel holes in close proximity to each other. On board Greg works with Professor Christina Ravelo (UCSC). Together they make a continuous record from the cores by matching features from the three samples. To help fit the pieces together they look at the physical property measurements from the cores. A common pattern in these physical properties allows them to “tie” the cores together at that point. For example an ash layer in all three cores can be linked to the same volcanic event and used to tie that moment together in the three cores. This is an important role during the expedition and this has to be done quickly to be able to give the driller directions as to the core depths that are needed.

Greg has found working in Geology to be a most exciting field. During the last sixty years the science of Geology has grown 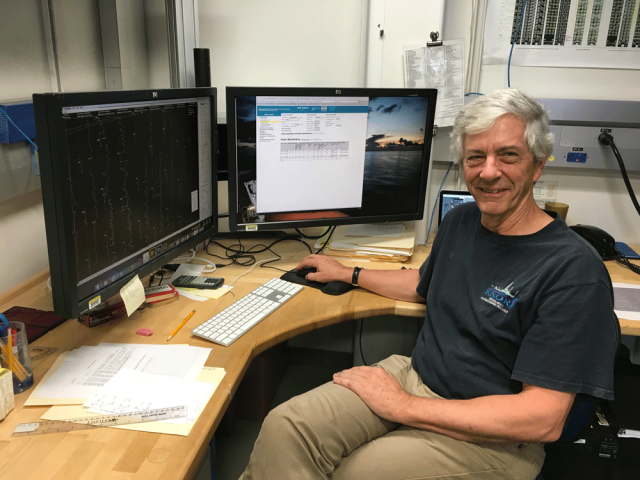 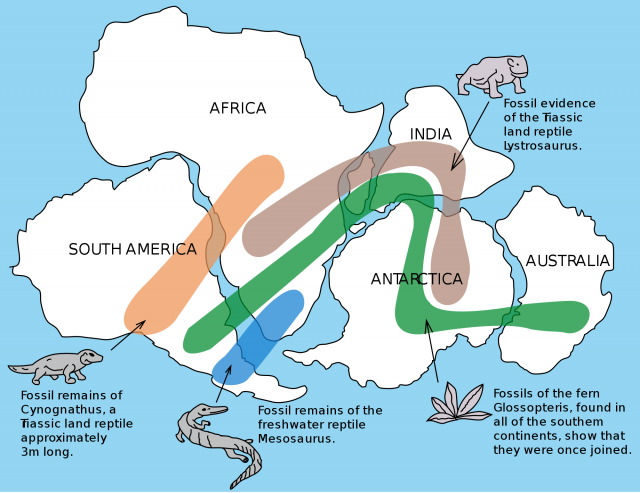 almost beyond recognition, as we have been increasingly able to use technology to help test ideas. Alfred Wegener was fundamental to initiating perhaps the biggest shift in thinking for many years. Prior to the 1950’s most scientists believed that the mountains seen on Earth were caused by the cooling contraction of the Earth’s surface. Wegener first proposed the idea of continental drift in a book he published in 1915. This idea had been considered previously but Wegner backed it up using evidence from the fossil records to suggest that landmasses may once have been connected. Most scientists dismissed this idea as ridiculous giving it little merit. It was not until the 1950’s after Wegener’s death that more evidence from the ocean floor emerged causing the hypothesis to be revisited. By the end of the 1960’s with the increasing weight of evidence most geologists had accepted this theory. It was shortly after this huge shift in thinking that Greg started his university career; in a field busy reevaluating dogma, geology was an exciting place to be a graduate student.

As a child Greg enjoyed spending time outside sailing; he attributes in part these early outdoor adventures to his interest in the Earth sciences. Greg always loved science at school but it was his fascination with the way the Earth worked that drew him to the particular science of geology. Geology is a hands on outdoor discipline which allowed him to apply the ideas he learned in science to explain and understand concepts in geology and the physical world around him.

Greg’s main research interests include understanding how sea level has varied over geological time scales.  He makes and studies sonograms of the sea floor. These are made using low frequency sound that echoes off the different layers of sediment. Using a computer the echoes of these sounds can build into a picture of the layers of sediment and rock under the ocean floor. When we drill this sediment we are ‘ground truthing’ these images. The continental shelf found around the edges of continents generally has quite a gentle slope. This results in relatively small changes in sea volume having a large impact on land area. Understanding how sea level has changed in the past helps us to better predict how it may change in the future. With the large human population along many of the world’s coastlines sea level rise will have a big impact.

Geg is also very interested in the accumulation of sediments. In the same way in which snow is blown into drifts, sediments are blown into big piles by the unrelenting movement of deep ocean currents carrying small sediment particles (clay, silt and nannofossils). Ocean currents are primarily driven by the different temperatures of water bodies – they are convection currents on a large scale – so by looking at the past rate of growth of these underwater sediment dunes we can start to understand the heat exchange in the past oceans. Greg studies the sediment drifts to gain a better understanding of past currents to learn how and why parts of the ocean floor are shaped as they are. The movement of these sediments also represents the movement of nutrients and organic matter.

Travelling has been a big part of Greg’s work, an aspect he has particularly enjoyed. He has been on many research expeditions. One of his first experiences was with the Ocean Drilling Program (predecessor to IODP) research vessel as a graduate student; this he feels was one of the defining points of his career. The expedition, as with all expeditions with IODP, allowed those new to the field to work alongside some of the key players in the Earth science community. Research expeditions have a truly international mixture of people sharing ideas and talents in a close space for an extended period of time. This results in a great exchange and refinement of ideas and a collaboration, which extends well after the duration of the voyage. Greg is please that graduate students continue to be given these opportunities.

The field trips, research expeditions and data collection have allowed Greg to travel to many places in the globe. He enjoyed the desserts of Oman with the sandy dunes blowing across the roads and the friendly people and good food of the islands of Madeira. He has been on about 30 ocean research cruises and enjoys the port calls. In his spare time Greg likes to play baseball. It is a sport he loved in his youth and returned to in his forties. He has never looked back and plays through the season with his local team. He lives in northern New Jersey and greatly looking forward to seeing his wife and family on his return.