Haloed be thy vein 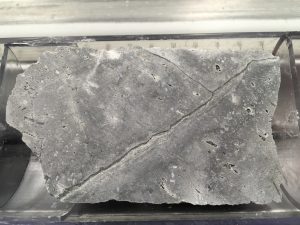 See this piece of core? Imagine you have to describe it to someone.

With most listeners, you’d probably get away with “dull, colourless, a bit broken in the middle”.

But for geologists, that just won’t cut it. This is what one of our core-describers might say:

And that’s the short version.

Core describers record every detail of what they can see, micro and macro, entering it all into a spreadsheet as they go. And I mean every detail: they’ve got 83 adjectives just to describe grain boundaries, and a whopping 550 distinct terms for microstructure. Depending on what they are describing, the spreadsheet might have up to one hundred columns!

Given our scientists have such a method with words and a such a broad range to choose from, we challenged them to write us poetry which featured their own extensive vocabulary!

The results? Anything but dull, colourless, and broken in the middle!

There is an insistent virulence to the cone.

Rocks come up from the depths with warnings.

The cores reek of sourness

“All you cations abandon all hope.”

But the sea is old and heavy with elements.

Minerals come out as the sea smothers the cone:

Do skeletal remnants of rock ever form under the sea?

In this massive ocean,

I want to be disseminated.

I need to find my rounded,

Colloform. Or is it, coliform?

I want to sharply eject my DNA

Only then will I fracture

With generations of mine being diffusive,

Filling the void of my existence,

In this massive ocean.

Ode to the 3am Baker aboard the JOIDES Resolution.

(Lecturer at the University of Wollongong who is also

passionate about baking and all types of food.)

An irregular hour for morning tea, but core-describers descend on

a massive pile of cupcakes: plain, chocolate and banana.

I hate the way you talk to me,

And the way you “fragment” your “core”s.

I hate the way you are “vuggy”,

I hate it when you are “recrystalized”.

And the way you are “subangular”.

I hate you so much it makes me “sea-sick”,

I hate it when you are “brecciated”.

I hate it when you send “core on deck”,

Even worse when it’s empty barrel.

I hate it when you’re not “consolidated”,

And the fact that you don’t give enough core.

But mostly I hate the way I don’t hate you,

Not even a little bit,

Not even at all 🙂

When we arrived on the massive ship, it was clear we had a patchy crew

Our faces were rounded, full of hope and excitement.

As time went on, we became sharp and angular with anticipation.

We needed core, we required nourishment or we would wither and recrystallize

Finally, the day came and “core on deck” was heard, reverberated in our lungs, filling our void.

We were no longer fractured, we had become whole, pseudomorphed with core.

After two months aboard, our thoughts were brecciated, concentration vuggy.

We left the ship and returned to our dendritic lives.

Until next time, JR, we will return, your corona will envelop us once more.

An ode to Corona

Oh Corona, how I miss you!

Your vuggy texture and

the way you diffuse into my body,

fill every vein with happiness

and every void with reason.

My heart brecciates at the thought

that we will be fractured for so long.

But – at the end of this anastomosing expedition –

shall pseudomorph the separation,

and recrystallise our friendship for it to last forever.