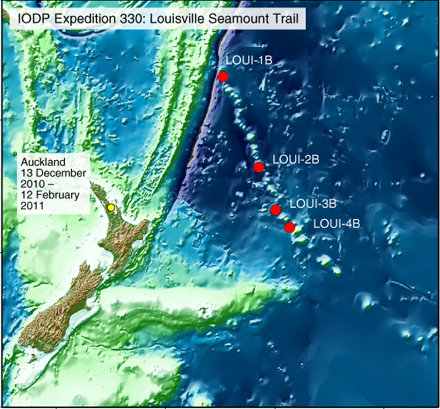 If you look at the picture that accompanies this blog, you will notice that just to the left of the Louisville seamount trail is a dark blue line that runs all the way down to New Zealand. That line is a boundary. To the left of it all the volcanoes (and there are a lot of them) are in the Pacific Ring of Fire. To the right of it, all the volcanoes (there are a lot there too, but most of them are extinct) are not.

The dark blue line was not just put there by the person who made this computer image; it is a feature of the ocean floor, the Kermadec and Tonga trenches. These trenches contain some of the deepest places in the ocean. The Kermadec Trench, which the JOIDES Resolution crossed over yesterday, has places as deep as 10,047 meters (32,963 feet) below sea level, places deep enough to hide Mt Everest and still have 3,934 extra feet of ocean to spare (which is good to know, in case if we ever feel the need to do that).

All along the Pacific Ring of Fire you find deep ocean trenches. In fact, there would be no Ring of Fire without them. The trenches are the places where the Pacific Ocean plate is being shoved underneath the continental plates that surround it (scientists call this subduction). As the ocean rock of the Pacific plate is pushed down underneath the continents into the mantle, it quickly heats up, melts, rises to the surface as lava and forms the chains of volcanoes that run parallel to the trenches. These subduction volcanoes are what make up the Ring of Fire and include some of the world’s favorite volcanoes, such as Mt Fuji in Japan and Mt Rainier near Seattle, Washington.

The Louisville seamount trail is not in the Ring of Fire because it was not caused by subduction. It was caused by a hotspot. What’s a hotspot? You will have to find out in my next blog (though I will go ahead and tell you that, in this case, it is not a place to get free Wi-Fi).