How the Ring of Fire is an Exclusive Club the Louisville Seamount Trail Cannot Get Into
We’re drilling our first hole! 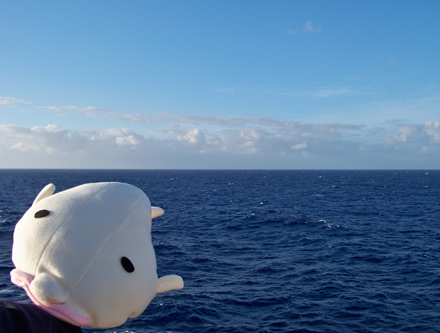 Right now the JOIDES Resolution is drilling into a mountain that is over 4000 meters (13,000 feet) tall. The mountain is actually underneath me in the photo, but can you tell it is there just by looking at the ocean?

For a long time, people did not know there were mountains in the ocean because they are hidden beneath the surface. In the last few decades, though, scientists and deep-sea explorers have discovered many of them all around the world.

See if you can guess correctly how many seamounts scientists predict there are in the world’s oceans. Here are some hints to help you guess:

Write your guess in a comment to this blog. I’ll tell you the answer in a couple days.

PS. The ocean’s second biggest secret is probably, “What is a blobfish?” To find out, read my blog profile or enter “blobfish” into an internet search engine.