How we drill and core in hard sediments and rocks 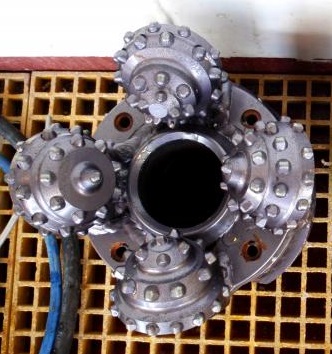 When we want to drill into hard sediments and rocks, we have to change the drill bit. In the deeper part of Site U1480, we used an RCB (Rotary Core Barel) drill bit rather than the APC/XCB we used before for coring the younger, softer sediments.*

One main difference between the two drills bits is that with the RCB the bit and the outer core barrel turn with the drill string.

The inner core barrel is retrived by a wireline when the core has been cut. This is a much faster method of coring than the conventionnal system often used in oil industry. With a conventional coring system, the core barrel is attached to the end of the drill string. Cores are recovered by moving the entire dill string up to the rig floor and back down to the bottom of the hole (called tripping). But here, we are in more than 4 km of water and we have to drill into ~1 km of sediments. Using this system of retrieving each core would be very slow and take many over 1/2 day for each core.

Once the core barrel is on the rig floor, the core liner, a plastic tube containing the core of sediments and rock, is  removed and carried onto the catwalk where it is inspected, gas measurements are taken, and it is cut into sections before analysis and sampling.

* technical sepcs on IODP drilling systems can be found here