Icebergs Ahoy, or A Change of Plans

First Drill Site and Ice Bergs
Are we there yet? 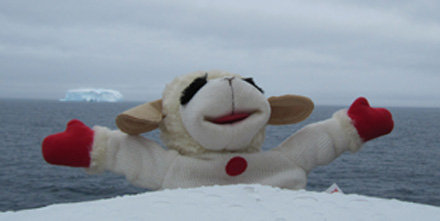 We were supposed to be in place yesterday so we could start drilling.  But as we got close, the fog finally went away to reveal . . .

Now, Lambchop has never seen an iceberg before, so she was very excited!  She made us take many pictures of her.  Here is the one she thinks is the cutest.  I agree with her, I think this one is very cute.

The icebergs were a problem for drilling.  They are dangerous if they are near the ship, so we could not drill our first site.  Since we did not know how long the icebergs would be there, the captain decided to move us to a safer place.  It was always on the plan to go to this place so we will still get the science we need, we were just going to do it in a different order.

Because of the icebergs we moved to a new spot.  Once we got there, the captain lowered the thrusters, and we deployed a beacon.  The beacon is something that is sunk to the sea floor and it goes PING.  We can use it to make sure we are still in the same spot.  In order to stay in the same spot though, the JR has 12 thrusters.  These thrusters are powerful engines located all over the ship, and they point in different directions.  Between the beacon on the seafloor, and these thrusters, the JR can stay very, very still.  In fact, the JR can stay in the same spot, even if the seas outside are over 50 feet tall!

Sadly, because these thrusters are underwater, Lambchop could not get a picture of them, but she could get one of the beacon being deployed.  This beacon will go PING every 10 seconds or so, from the bottom of the ocean.  Where we are at now, the bottom of the ocean is about 3500 meters down.  That is almost 11500 feet!  If you have ever been to Chicago and seen the Sears Tower, the water here is almost 8 times deeper then the Sears Tower is tall!  The ocean can get very deep.

When we are done here, the Captain can send out a signal to the beacon, so it pops back up to the surface.  We would not want to litter in the ocean would we?

Now, when Lambchop left off her following the cores, she had stopped at the MST.  The MST actually measured 3 things.  The first thing it measured is called the Gamma Ray Attenuation Bulk Density sensor.  But Lampchop calls this the GRAPE.  Because who wants to say “Gamma Ray Attenuation Bulk Density sensor” over and over again!

This is what the GRAPE looks like.  Sadly it does not look like a real grape though.  Probably a good thing, Lambchop likes grapes and she might eat it!

The GRAPE measures how much water is in the core.  This is useful because Lambchop knows how big around the sample is, and if she knows how much water is present, then she can figure out how much sediment is actually present.  This is important because of something called porosity.  If you pick up some sand, you can see it is made of individual pieces.  We call these pieces “grains”.  These grains are usually shaped a bit like a ball.  If you make a big pile of grains, there is still a lot of space in between the grains.  Scientists call this space ‘porosity’, and in sediments under the ocean, the porosity is filled by water, and the GRAPE tells us how much water is there.

With all the other neat things going on today, Lambchop is going to wait to tell you about the other two sensors until next time.  So make sure you come back for the rest!