Tschüss JR!
One Foot On Land 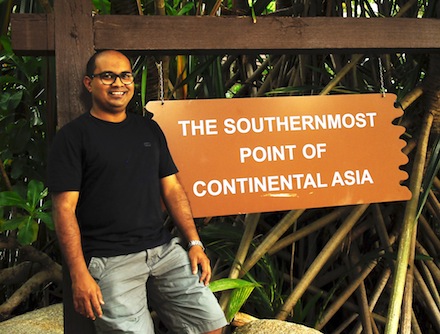 My third day on the JOIDES Resolution (JR), the ship which will be my home for the next two months. We are still in port and awaiting to receive necessary clearance to leave the port.

I have been on a cruise before, but I am participating for the first time in an IODP expedition. I am very much excited to sail on-board the JR as part of an international team of scientists, and to experience life in middle of the sea. This reminds me of history lessons telling the story of great explorers who sailed to discover new lands. We are, however, not out for discovering new lands; rather we aim to find out the secrets kept within the sediment record in Bengal Fan. Sediments keep record of the environmental and climate conditions during its transport and deposition in sea. The secrets are waiting for us, challenging our scientific knowledge and personal endurance.

After leaving the port and on our way to the sampling site, we will pass through the Singapore and Malacca Straits that has a long history of piracy. In fact, the third mate informed us about ‘dos and don’ts’ during an unlikely event of pirate attack while briefing on security yesterday. The ship has many anti-piracy measures. We are far more equipped than Tom Hanks in the Captain Phillips movie. Moreover, a drill ship with over 130 people on-board is an unlikely target of pirates. So no worries.

I will upload photographs very soon.