One Foot On Land 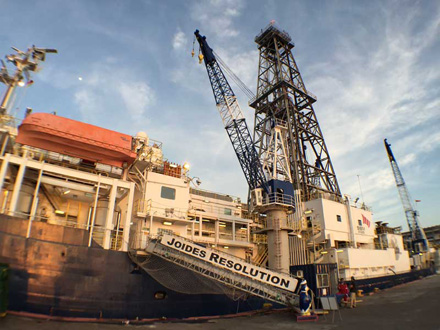 For me, planning and production started two months ago. For others, the plan has been in the works for 18 years! The time is now. We’ve converged on Singapore, our port of call. And this morning, we launch. We’re about to embark on a two-month research expedition aboard the JOIDES Resolution (JR for short) in the Bay of Bengal.

Our goal is to drill sediments from the Bengal Fan, which is the outflow of two mighty rivers – the Ganges and the Brahmaputra. They drain much of the Himalaya mountain range, so the sediment we’re drilling for, used to be high in the mountains. Over time, it eroded and washed down into the rivers, and then into the Bay of Bengal, finally coming to rest in the Bengal Fan. There are layers upon layers of sediment to be recovered and examined. The scientists on board are hoping to learn more about mountain formation and the history of climate and the Asian monsoons by studying those layers of sediment we pull up.

I am the expedition video producer and one of the education officers. I’ll be producing short videos while we’re at sea, blogging a bit, and helping the other Education Officer, Diane Hanano, produce the live webcasts we do with schools and museums around the world.

I’ve been on an expedition on the JR once before, on Expedition 330: Louisville Seamount Trail, so I have some idea what to expect. But that doesn’t actually make it much easier to prepare! I’ve combed through my equipment lists again and again. I have tested everything. I have back-ups for everything, sometimes even back-ups for back-ups. We won’t see land for two whole months. FedEx is not an option now. If it’s not on the ship when we leave, I’m going to have to live without it. So right now, while we are still attached to the dock, I worry. Did I forget anything?? Do I have enough back-ups? What if, what if, what if? Singapore really has everything in stock, so if I did forget anything, I could buy it, but only while we’re still in port. We’ll be leaving in a few hours. Once we pull up the gangway and shove off, I think I will feel a sense of calm. I can do no more shopping. I’ll have to do my job with what I have. And I probably have everything (in doubles). Almost gone.