Journey of a Core: Intro to JR Science Labs 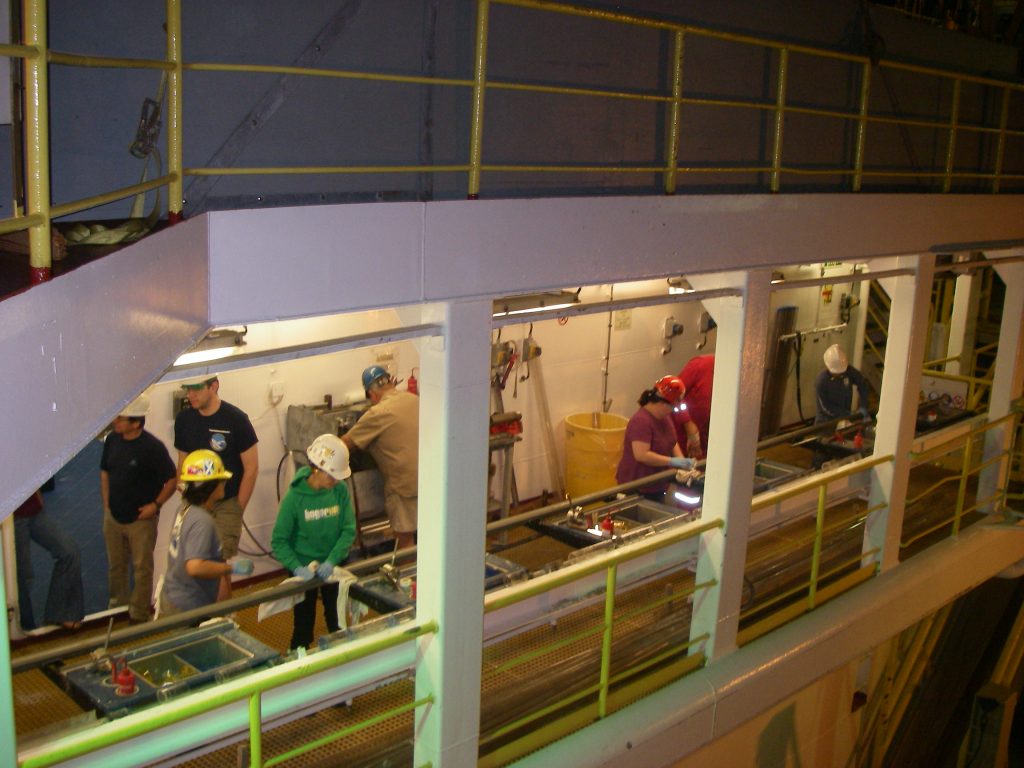 Once a core of deep-sea sediments from a known location retrieved from the seafloor by the drilling team and processed on the catwalk by the technical team, what happens next? The next series of blogs will provide a visual introduction to the many laboratories on board the JR, highlight a different lab setting each post including the tools of science used, the 340 scientists and technicians in labs, and a series of teaching resources for the classroom. These are selected to help students learn more about the science behind the research in each lab. Follow along as we virtually tour the main research areas of the JR. Photos for this blog are from Expedition 340 Co-Chief Scientist, Anne Le Friant.

When the core samples enter the lab from the catwalk each is catalogued and labeled using automated laser etching and a hand etcher. The cores are then stored on the core rack for a few hours until the temperature of the core collected from the seafloor is similar to the temperature in the lab (atmosphere). Most cores are quite cold to touch. After several physical properties have been analyzed on the whole cores they are split into two halves. One is the archived half and the other is the working half.

There are five main research teams who answer different questions about each core sample.

The physical properties of the seafloor formations are described by structural geologists from whole and split core sections. They work to measure density, sheer strength, porosity, volume and mass of the rock types. These geologist work with the core describers to answer questions about what conditions were like when the rock was formed and what happened to rocks through time.

The lithostratigraphy of ocean cores is the sedimentary layers present based on rock or sediment types. Sedimentologists and volcanologist are responsible for providing a complete visual description of the split cores (Visual Core Description). They describe the physical characteristics of the sediment/rocks and determine what types of sediment and rocks are present based on such things as layering, color changes, texture. They answer questions about what conditions were like when the rock was formed as well as what has happened to the rock through time.

The biostratigraphy of ocean cores provides clues about the sedimentary layers based on microfossils found in the deep-sea sediments. Paleontologists organize sedimentary layers into biozones based on the first and last occurrence of fossil species. The presence of certain microfossils helps scientists determine the age of the sediments. Paleontologists and paleomagnetists work together to establish the age of ocean cores. Visit the expedition 340 blogs of ocean detectives Michael Martinez, Debbie Wall-Palmer, Andy Fraass and Mohammed Aljahdali.

The geochemistry labs are located on the F-deck just below the Core Lab. Here four 340 geochemists and several technical staff analyze subsamples of the cores for many characteristics. Some include looking at the sediments for organic carbons, the pore water between the sediment grains for major and minor elements, and examining the mineralogy of the ocean cores. Stay tuned for blog on the Geochemistry of ocean cores.