Postcards from Scientists – What is your favorite interval of geological time?
Introducing the Stars of the Geo-wrestling World….

Alyssa is the publications specialist for Expedition 369. She is responsible for collecting and organizing the publications as well as creating visual core descriptions (graphical representations) of the described core data. When she is not sailing on the JR, she works in the IODP offices at Texas A&M.

Here’s what she had to say about the book she’s been reading: 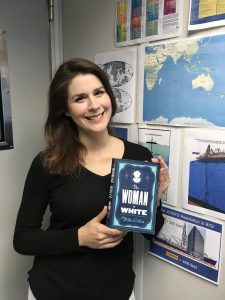 “I’ve just finished reading The Woman in White by Wilkie Collins- a book written in the 1800s and regarded to be among the first mystery novels. It’s a gripping 600 pager with an involved plot that features sinister intrigue and murder, as well as questions of identity and insanity. My favourite aspects of the book are the fascinating and well-developed characters (the cunning hero and heroine, and one of the most insidiously wicked, yet charming villains) and the notes of Gothic horror. It was also quite clever in its approach, as the story is narrated by the different main characters to some extent. Overall, I enjoyed unravelling the mystery and found myself totally engaged while reading.”

Did you know that we have a library onboard the JR? There is an extensive collection of books kept in the lounge for people to borrow. We also have a large magazine and board game collection for when people aboard have free time! If you’re not into reading, there is also a movie room and gym where many people go to relax or keep busy when not on shift.