A Small City at Sea
JR Book Club with Sietske

Carmine from the University of Adelaide is sailing onboard as one of our sedimentologists. Here’s what he had to say about his book club choice: 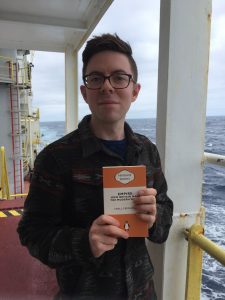 “I’m currently reading a book called “Empire” by the Scottish historian Niall Fergurson. The book provides an in-depth view of the rise and fall of the British Empire from its origins to the present day. Niall is well known his controversial views on historic and contemporary events and this book is no different. One of the topics he touches on is whether the British Empire had a positive impact on the world. On a lighter note, he points out that because of Empire, he has family across the world and it gave India a taste for condensed milk. This is not to say that he ignores the dark side of Empire including when James Cook declared Australia “Terra Nullus” – something that is still topical to this very day and addresses in quite some detail. For those who are intrigued by the influence of British on the world, this is enlightening read if a little lengthy.”