May All Scientists Have Good Mothers!
Lift Off!!!!!!!

The expedition (i.e., IODP Expedition 371) I will be on is part of the International Ocean Discovery Program (IODP). It is an amazing program and I would like to share a bit of its history as it is the most successful international science program (perhaps outside the International Space Station) and for me being on an IODP expedition is the closest I will ever get to being on USS Enterprise with Captain Kirk and Spock!! (I will tell ya why I think this in my next blog, about the expedition)

IODP is an international marine research program that is made up of over twenty countries that explores Earth’s history and structure recorded in seafloor sediments and rocks. It is funded by the National Science Foundation and its international partners in IODP. IODP and its predecessors (Deep Sea Drilling Project and Ocean Drilling Project) have drilled sedimentary cores that penetrated up to two kilometers below the sea floor from hundreds of sites from every ocean basin.

The result is that IODP is perhaps the successful international science program ever (outside of the international space station), as “IODP wrote the book on understanding past climate”. Some of the “firsts” for the International Ocean Discovery Program include:

The drill ship I will be on, the JOIDES Resolution (pronounced joy-deez), has been the workhorse of the Ocean Drilling Program until a second ship, D/V Chikyu was brought into service in 2007. The Chikyu is the world’s first riser drilling-equipped science vessel, capable of drilling deeper at sea than any other science drilling vessel to date. One of the main goals of the Chikyu is to drill deep into the crust to obtain rocks from subduction zones to better understand plate movements and the resulting earthquakes they can produce.

Each year, the  JOIDES Resolution (JR) departs on five scientific expeditions approximately two months in length. Every expedition has specific scientific goals chosen through an extremely careful review process. A computer-controlled system regulates 12 powerful thrusters in addition to the main propulsion system. Using an acoustic beacon set near the drill site on the seafloor, this system keeps the ship stabilized over the drill hole despite wind and waves. Pieces of drill pipe are threaded together and lowered from the steel derrick through the “moon pool,” a seven-meter-wide hole in the bottom of the ship. JOIDES Resolution, is outfitted with modern laboratory, drilling, and navigation equipment. 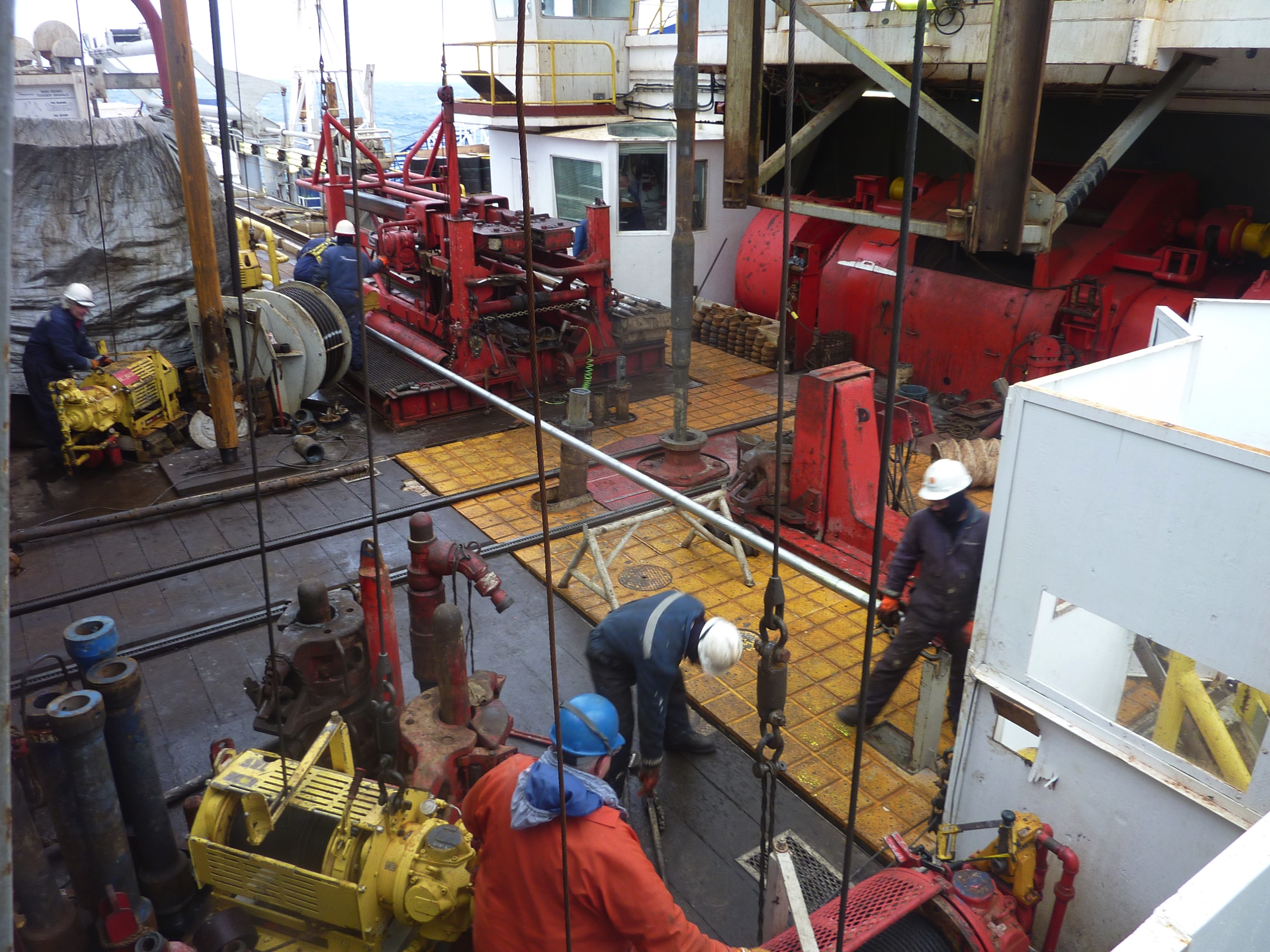 The ship is 143 meters long and 21 meters wide, and its derrick rises 61.5 meters above the water line. The drilling system can handle 9,150 meters of drill pipe, long enough for drilling in 99.9% of the world’s oceans. 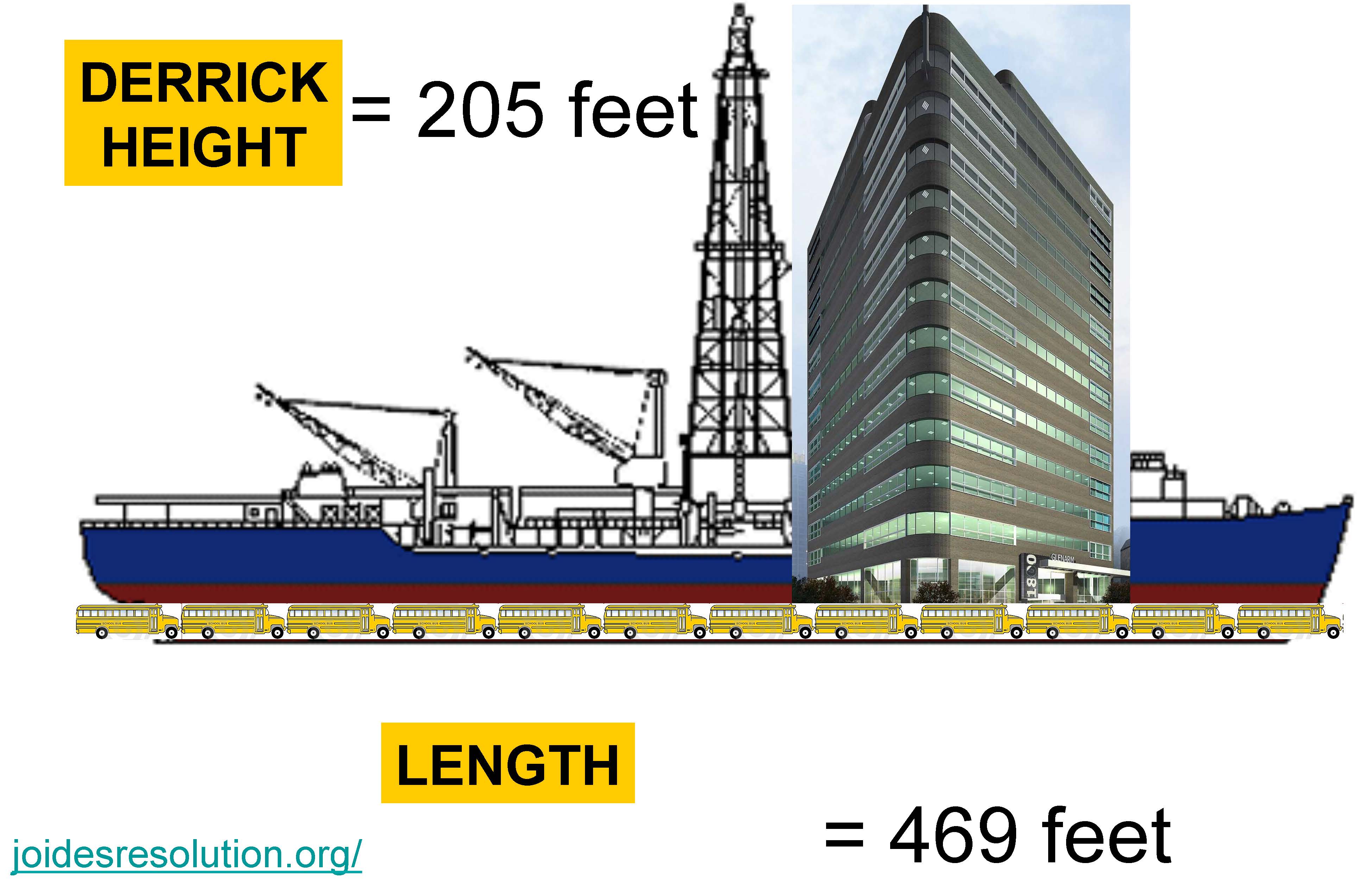 Figure 2. The JR is nearly 500 feet long, which is equal to about 12 school buses lined up back to back.  The drilling derrick is also over 200 feet tall, which is about the same height as a twenty story skyscraper.

Figure 3. A cartoon showing the JR, extending its drill pipe through the water column, the reentry cone (when re entering a drill hole), the six thrusters that keep the ship over the drill site.