Only one week until we sail!
Sampling the cores taken from Antarctica 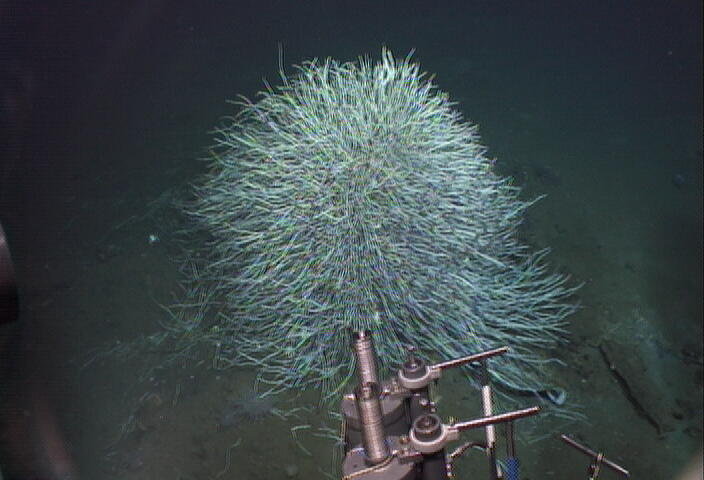 We’ve been REALLY busy out here!  There were some problems with JASON at the beginning that could have potentially ended the cruise, fortunately the JASON group was able to cannibalize a part from Medea (which monitors JASON while it’s in the water) to replace the problem JASON part.  Since then we’ve been getting all sorts of science done: downloading pressure data, sampling fluids from inside the boreholes, removing and replacing experiments on the wellheads, etc.  All the work conducted on this cruise HAS to be accomplished before Exp. 327, so the pressure is definitely on!

Yesterday we went up to Middle Valley, which is my study site.  I’ve been working with pressure data from Hole 857D for about the last 3.5 years.  The dive was very important not just to get more data for me, but also to deploy a new data logger which is compatible with the NEPTUNE Canada cabled observatory!  Now when NEPTUNE comes to Middle Valley, in a few years, they will already have something to plug into!  It was very satisfying for me to get this work done…I’ve been working with this site for so long that I feel like it’s mine!  While we were there we also checked out the state of the local hydrothermal system, including "Puppy Dog" (a biological community living in a low temperature seep area).  The top image is "Puppy Dog"…doesn’t it look like a hairy dog?!

One thing a lot of people don’t realize is how much of science is really conducted on the fly.  We come to sea with certain goals, but when we can’t meet them, or they change, how do we deal with that?  The answer is simple: we jury-rig something to fit our needs!  We can’t just run out to a hardware store or Target…so we have to use what is available to us on the ship.  A great example of this is the "snot sucker" syringe sampler that Sam Hulme built the other day.  We wanted to sample some interesting flocculent material on 1026B for geochemical and microbiological data…but how to do it?  We had a syringe, some polyprop line and some bolts…the JASON group lent us something to make the syringe more substantial (so when JASON picked it up it wouldn’t break).  From our cobbled together materials Sam made the syringe sampler seen in the image below!  AND IT WORKED!  We got a neat sample of the rusty floc that covers 1026B, which Katrina Edwards (our resident microbiologist) will analyze.

Stay tuned for more!  Only 4 days left to get it all done….it’s CRUNCH TIME!