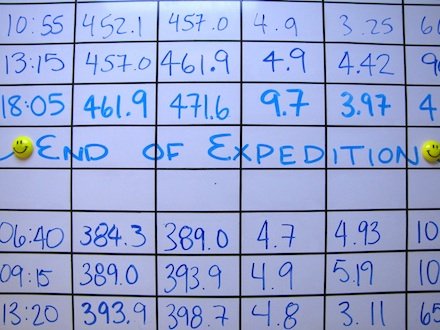 We finished taking cores for Expedition 344 today at 472 meters (~1550 feet) below sea floor. We won’t be hearing, “Core on deck” again on this venture of the JOIDES Resolution.

For the last time on Expedition 344, “Core on Deck” rang out over the loudspeakers. Everyone that was on shift went out to the catwalk (Core deck) to watch the final core come in.

The basalt still has many lighter colored veins made of calcite, pyrite, silicate and additional unidentified minerals.

The basalt itself is very hard, so where the scientists want a sample, there is a new way of letting the techs know, and it is kind of humorous!  They printed small tags with each scientist’s face on them, and the scientist just sticks a tag on where they would like a sample cut.  They also use red or blue wax pencils to mark off the amount.

A great deal of discussion is still going on around the tables amongst the geologists. They have done a few thin sections, but, again, they will have to wait for further tests to confirm the chemical structure of the basalts and other minerals in these cores. Hand lenses will have to do for now!

Everyone is really busy finishing with sampling, packing samples and writing last minute reports. We will be sending instruments down the drilled hole now (downhole logging), so that the scientists can get more details and information about the basalt and sediments surrounding the hole that we drilled at this site.

I spent time today packing up all of the decorated Styrofoam cups that students sent to me before I embarked on this expedition.  They still weigh the same (why?) but they are much smaller, so I am able to use less packaging to get them home safely.

Last night, our Expedition Videographer, Thanos Fatouros, went out on the deck to get some fresh air very late at night (his shift is noon to midnight), and when he looked over the side of the ship, a very unexpected visitor caught his eye.  A huge whale shark was cruising by right next to the ship! This photo is grainy, but there is no mistake that this is a whale shark.  They can grow to 40 feet long. They are filter feeders and consume only plankton! They are the largest living non-mammalian vertebrate.

Only one more sunset from the ship after tonight! From the heli deck…