Logging without an axe 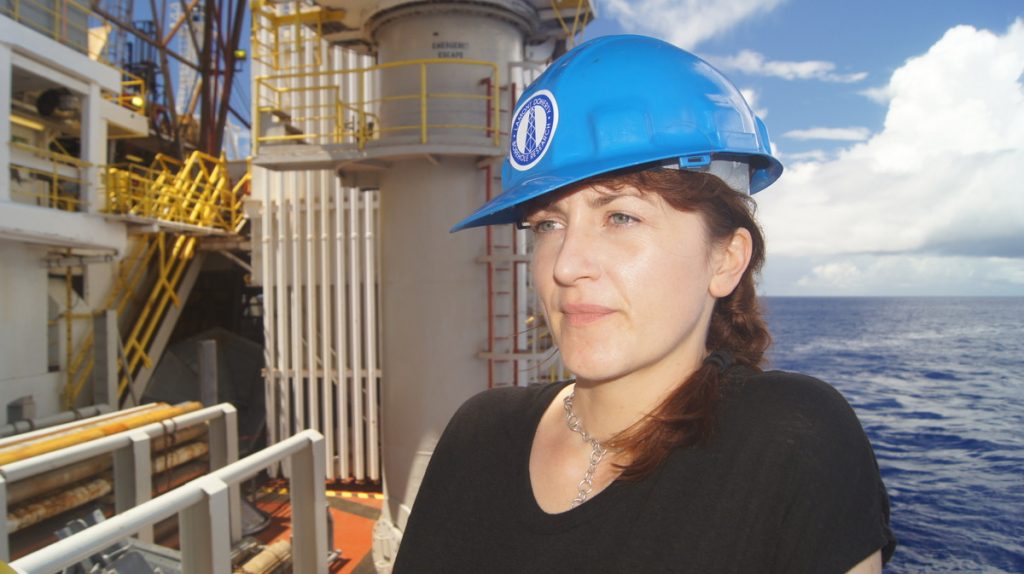 Though structural geologists use our smaller sample of cored rock to form the larger picture of what its surrounding rock may look like, confirmation about the hole’s physical and chemical traits comes from the work of our logging staff scientist, Sally Morgan.

Sally has waited patiently for the day we are done drilling a hole- almost 4 weeks now since we started the cruise. Though plenty of work leads up to these few days for her, she finally gets to spotlight the rented instruments that logging technician, Clay Furman, oversees. [They want to emphasize that logging has nothing to do with trees or fire axes.] They both go from a normal 12-hour shift to about a 36-hour marathon, where they monitor the screens as these precious tools descend 15,000 feet below.

We decided to drop logging tools earlier than planned after we pulled up the drill bit and found it entirely devoid of cones—it’s tip just a flat surface. This requires sending the drill string to the hole one last time, but with another tube sliding down inside it until reaching the bottom of the casing (~300 feet below the seafloor). The tools then pop out into the open hole and travel down as far as they can. Measurements are done twice and always on the way UP the hole- which gives an uninterrupted assessment of the hole.

Piecing the chosen suite of logging tools together must be done in sections since the two tool strings are each about 130 feet long.  A fat wireline attached to the entire apparatus will give us a real time connection to what the instrument “sees”. Crew must keep tension on the cable as it descends so it doesn’t get ahead of itself and tangle. It will take about four hours to arrive on the bottom and start streaming data back to the ship. In our case, a ledge in the hole stopped the tools from descending to the very bottom.

The first suite of tools- the Triple Combo- can measure the rock’s density by using cesium, a radioactive source the size of a pencil eraser. Its short half-life and position in the tool string means it won’t contaminate one of the other instruments that detect the natural radiation of the rocks (e.g. potassium, uranium and thorium).  Finally, its ultrasonic imager has a rotating “eye” and sends out acoustic pulses that bounce off the walls to create a type of topographical map.

This string of tools returns to the ship before the second tool string, the FMS-Sonic, heads down. This “rock star” group of tools can calculate velocity at which an acoustic pulse travels through the rock. It will also carry the same tool that measures natural radiation to allow comparisons between the two tool strings. Finally, an electrical tool creates an image from measuring how well the rock conducts current, where features such as fractures, veins, faults, and stress direction can be identified. This tool has four arms with pads that must contact the wall, so it’s essential the borehole is not any wider than the spread of the arms-15 inches. Both images, derived from numerous mathematical calculations, can help demonstrate how the core was oriented in the hole—something we don’t know when the core comes up in pieces.

If getting caught inside the hole these loggers have methods to chop their way out. It’s not a challenge the team wants to encounter, particularly because each tool string is worth more than a million dollars and has a radioactive source in it. So if all goes well, sleep may greet them tomorrow, and then a logging marathon will start all over again once we finish coring the next hole.