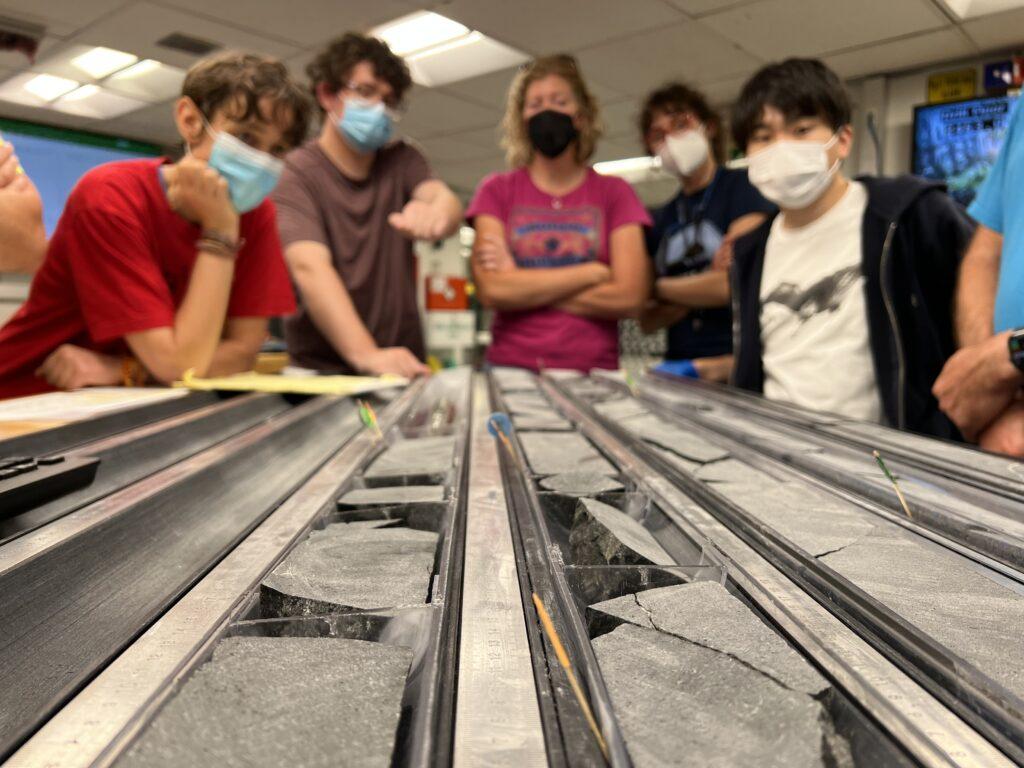 Now that we have core on deck, life on the JOIDES Resolution is wildly different. While quarantined in port, you could find us wandering around aimlessly, playing cards, eating too many cookies, and counting down the minutes to our next COVID test (because there was NOTHING else to look forward to). We lived in a crescendo of alternating despair and ennui.

Now that we have core on deck, life on the JOIDES Resolution is wildly different. We no longer bump into each other as we pace the hallways, wondering if there is a purpose to us existing on the boat, or even on the planet. We found our motivation, our driving force, the reason we said good-bye to our loved ones to live at sea for sixty days.

We are ready to do what we came here to do.

What’s so striking about this endeavor is just how unique our samples are. Right now, we are the only humans on the entire planet who have access to these rocks. If it weren’t for ocean drilling, people would have to wait hundreds of millions of years for the rocks to maybe be uplifted from below the sea. In all likelihood, these rocks would be subducted, melted down and recycled, and never ever exposed in a place on Earth’s surface where they could be observed.

With the power of exclusive access to these one-of-a-kind materials comes great responsibility. Our role while at sea is to prepare these cores in a way that enables not just us, but the entire world, to carry out investigations that will push the bounds of scientific knowledge. The rig floor is not the only part of this ship that is a well-oiled machine. Each of the Expedition 391 scientists has a very specific purpose within the lab to make sure that all the data we need is collected thoroughly, accurately, and as efficiently as possible.

Read on to meet the Doers of Science, the conduits between the ocean floor and the greater scientific world. Presenting… the LAB TEAMS OF EXPEDITION 391.

FEATURED ONSHORE SCIENTIST: Simone Pujatti (University of Calgary). Simone is actively supporting the efforts of the offshore petrophysics team by writing and reviewing methodology and site reports. Additionally, he will be helping remotely with data management with the successful drilling of each hole.

Core Description: Core description scientists will look at the sea floor sediments and underlying volcanic rocks to help figure out the history of the seamounts, from their initial volcanic formation to later covering by ocean sediments. By determining which types of rocks and sediments are found at the drill sites, the core loggers can understand how the volcanoes grew and became eroded with time.

FEATURED ONSHORE SCIENTIST: Dr. Giacomo Dalla Valle (ISMAR-Bologna). Giacomo is offering support to the part of the description of the sedimentary and volcanoclastic rocks, which are “above” the volcanic basement. Through the interpretation of photographs, and of their schematic logs he will help the colleagues on board in transcribing their observations and making their supporting figures.

Micropaleontology: Micropaleontologists will look at fossil content in cored sediments to reconstruct a depositional history the area. Specifically, calcareous nannofossils and foraminifera are great fossil groups for determining the age of the sediment, as well as examining the paleoenvironments, paleoclimate, and even paleoecology of a region. On a large scale, marine microfossil assemblages can be excellent indicators of major climatic shifts, responding to crucial climate perturbations such as the onset of the Antarctic circumpolar current (Eocene/Oligocene boundary) and the Paleocene Eocene Thermal Maximum.

Geochemistry: Shipboard geochemists look into chemical compositions of various materials, including porewater, sediments, gases and igneous rocks we retrieved from drilling. The geochemical signatures of these materials can tell us about the chemical reactions occurred in water-sediment-rock systems. These reactions help us understand the environment these sediment/rocks are formed, their preservation conditions, as well as the material transport between different material components of the Earth. These geochemistry works lay the foundation for further studies onshore. Ultimately, we geochemists use these pieces of information to understand how various parts of the earth work and evolve.

Mike and David are also… Volcanologists: Why does the expedition need volcanologists when we are drilling the sea floor…? What does a volcanologist do anyway – surely they should be looking at pointy, smoky volcanoes about to erupt..? Truth is volcanologists are a wide and varied group of scientists looking at a wide range of Earth’s phenomena that give rise to, and follow on from an eruptive event. There are many types of ‘volcanoes’ – the most common are not necessarily the pointy, smokey ones, but those that bubble and fizz, and erupt continuously on the ocean floor – so we very rarely see them, or are even aware they exist. These are part of the fiery ‘breathing’ of the planet, and ultimately are part of the story that drives the continents about the surface of our planet. So, this is the job of the volcanologists aboard our ship, to try and understand and build a story of the ancient seafloor volcanoes that we are about to drill – the cores we get will be like a story line telling us of the dying days of ancient sea volcanoes – our challenge is read their story from the rocks, and then tell it…