Microbiology Is Alive and Kicking!

It’s a Sill!!!
The Wildlife of the Guaymas Basin 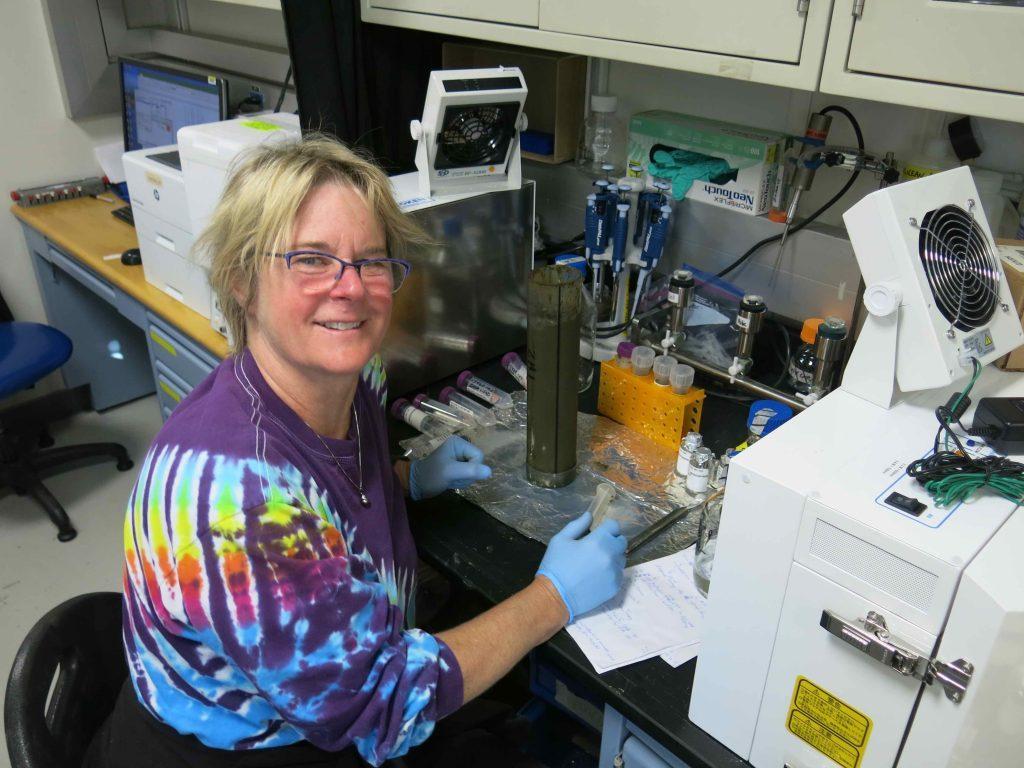 The deep sills have captured much attention during the last two days, but the microbiology group has been busy collecting and processing samples. The thermal gradient at this site was again exemplary: not too cold, not too hot. In Hole B, clean APC coring reached down to 300 meters, corresponding to ca. 70°C. The sediments are therefore ideal for starting microbial enrichment cultures for microbes adapted to cool temperatures (psychrophiles, 0-10°C), moderate temperatures (mesophiles, ca. 20-30°C), warm temperatures (moderate thermophiles, ca. 40-50°C), hot temperatures (thermophiles, ca. 60-70°C), and extremely hot temperatures (hyperthermophiles, above 80°C), and the transitions in between. Here, Florian Schubert is taking a break from his temperature-controlled incubations for sulfate-reducing bacteria to determine their process rates; in other words, to find out how much sulfate they are respiring over time.

As improbably as it sounds to non-microbiologists, there are biochemical variations to our familiar type of respiration with oxygen. The most widespread version in deep marine sediments, that no longer contain oxygen, is respiration with sulfate, a common and plentiful seawater compound. All in all, respiration via sulfate reduction degrades as much biomass as respiration with oxygen, and it is a widespread measure of microbial activity in the sedimentary subsurface. Next to Florian, Laurent Toffin is wrapping up enrichments for different types of thermophiles, with the goal of cultivating individual species. Getting there is an epic journey that requires many sample transfers and dilution steps with selective media that encourage the growth of specific types of bacteria.

Virginia Edgcomb (top) is dissecting a whole round core sample for enrichments and cultivations of marine fungi; not large mushrooms of the edible kind, but microscopic, single-celled versions that are surprisingly pervasive in marine sediments. Single-celled fungi are supposed to degrade complex organic compounds that are often quite tough to digest, just as their terrestrial cousins are degrading dead wood and turn it into edible biomass that can be harvested at this time of the year.

Biogeochemist Armelle Riboulleau from the Université de Lille in northern France is busy with anaerobically preserving sediment samples to analyze their amount and kinds of reactive organic sulfur compounds. Sulfur is a tricky element; it can create molecular bonds with its own kind and with carbon that tie molecules together and turn — for example — raw rubber into a tire. Many forms of sulfur are also highly sensitive to oxidation, and therefore protection from oxygen is very important. The anaerobic glove bag is filled with nitrogen gas, which does not react with sulfur (in fact, it does not react so easily with anything), and thus the samples can be handled safely.

Hole B at site 1546 is ended at last, at 340 meters depth, and the break after the fast pace — one core every 30 to 60 minutes — is more than welcomed. This is also a perfect opportunity to celebrate a double birthday among the science crew, Manet Peña Salinas and Joann Stock. The Galley crew knows how to handle chocolate and cream!

What can one wish for on the JR? The ship is like a full-scale resort, where room service, laundry, meals, beverages and all kinds of fun activities are included. Perhaps Joann and Manet ponder the implications of returning to normal life?

This blog post first appeared on Oct. 9 on my daily blog of EXP385. Make sure to go to expedition385.wordpress.com to read the latest updates of this expedition!