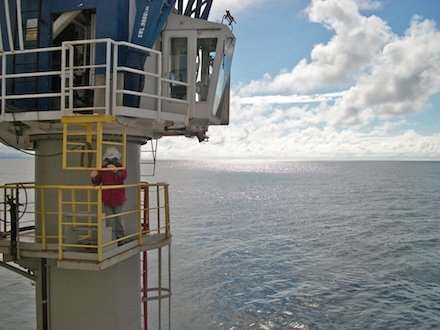 Where are we now?
Off the western coast of Costa Rica, in the Pacific Ocean. Our coordinates are still N 8°36 min, W 84°4 min as we continue coring operations at this site. Very calm water today. Water temperature and air temperature still the same.

Scientists at Work
The Drill Teams have been working 24-7 to bring these cores up onto the Rig Floor.

“Core on Deck!” can be heard over the loudspeakers often now since cores are coming in every few hours from this site where we have been for ten days, even through the night since there is always a shift of people working on the JR.

The scientists are still enthusiastic about every core as we go deeper and deeper since this is a key area over the subduction zone.

The core is becoming more and more “consolidated” the deeper we go.  Consolidated means that the core is turning into harder rock as the depth increases. Various tools are used to begin to understand the processes that shaped the core sections.

When a section of the core has been changed by forces underground and over time, scientists can use a Goniometer to get a quick idea of the angle of deformation.

Some sections of the core become very fractured,

and in some, there are tiny fossils or bits of fossils.  Some have small seams of coal where some organic matter was buried long ago.

Life on Board
A small boat from the mainland apparently had some engine problems and started drifting too close to the JR.

After some radio exchanges (in Spanish), the Zodiak was deployed to go over and help them out.

From 500 meters under the sea, west of Costa Rica…