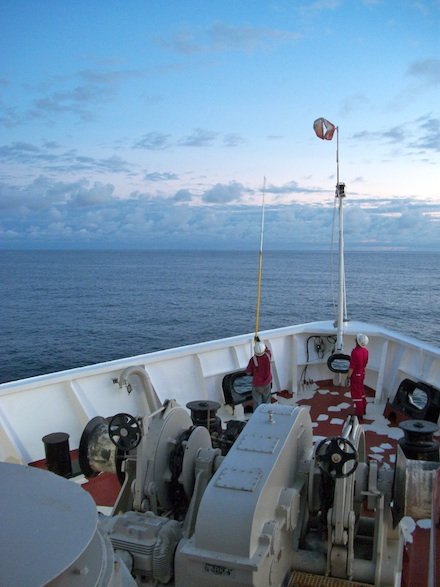 A Google map screenshot of the Isla Del Cano (marked “A”) shows where the island is so as to give a visual idea of our location.

This island is off the port side of the ship about 15 miles and is between the JR and the mainland of Costa Rica, which we can also see when it isn’t too cloudy.

Scientists at Work
Core on Deck! After all of the waiting, now we are inundated with cores!  A section has been coming in every couple of hours, and the scientists are very happy! The first piece of core came on deck about 5:30 pm but it was only about 1.5 meters long.  Complete sections started coming up after that first one.
The techs bring in the core on their shoulders…

Then, working quickly and wearing gloves to avoid contamination, they wipe it down with isopropyl alcohol and mark where to cut it.

Next, they cut it into 1.5 meter sections and cap it to avoid losing any water that may be in the core.

Then. the scientists quickly crowd around to get a first look and examine it for interesting areas inside the clear core casing.

The core is labeled, split in half, and taken in to the labs.  Nothing makes a micropaleontologist happier than sediment cores fresh from the sea floor! (Micropaleontologist Paula Diz Ferreiro, University of Vigo, Spain)

On the Core Description table, scientists discuss what they think was going on in the core as they examine different features and areas of the archive half of the core. No samples are taken out of this half of the core.

Drilling is going very well (finally!) at this difficult hole, with the current depth at about 500 mbsf (meters below sea floor). We will continue down to 800 mbsf at this site, if possible.