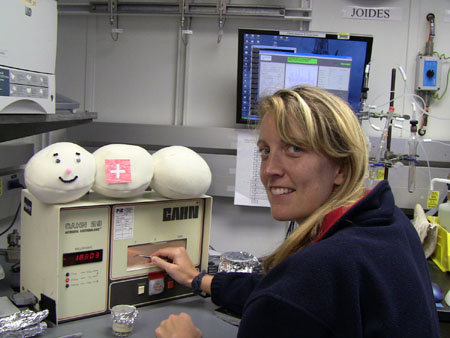 Today, I’d like you to meet my friend, Nathalie. She’s putting me on the scale because I won’t tell her how much I weigh! I hope that she keeps it a secret.

Nathalie Dubois is working on the JOIDES Resolution as an organic geochemist. She grew up in Switzerland, where she earned a Masters degree in geology at the University of Geneva. She then earned a PhD in Oceanography at Dalousie University in Halifax, Canada before moving to the United Kingdom as a researcher at the University of Manchester.

Her research interest is with the sediments of the seafloor. Nathalie wants to know about the size of grains (particles) and how they are related to bottom currents (flows of water near the ocean floor). On Expedition 329, one of her responsibilities is testing the sediments for large amounts of methane, which could be disasterous for the ship, since it is potentially explosive. This is one of the first tests done when sediment cores are brought up on deck. In addition to this, Nathalie is helping to determine the amount of organic material in the sediments.

At home, she is involved in search and rescue operations on Lake Geneva. She has been a lifeguard, likes to swim, water ski, and boating.