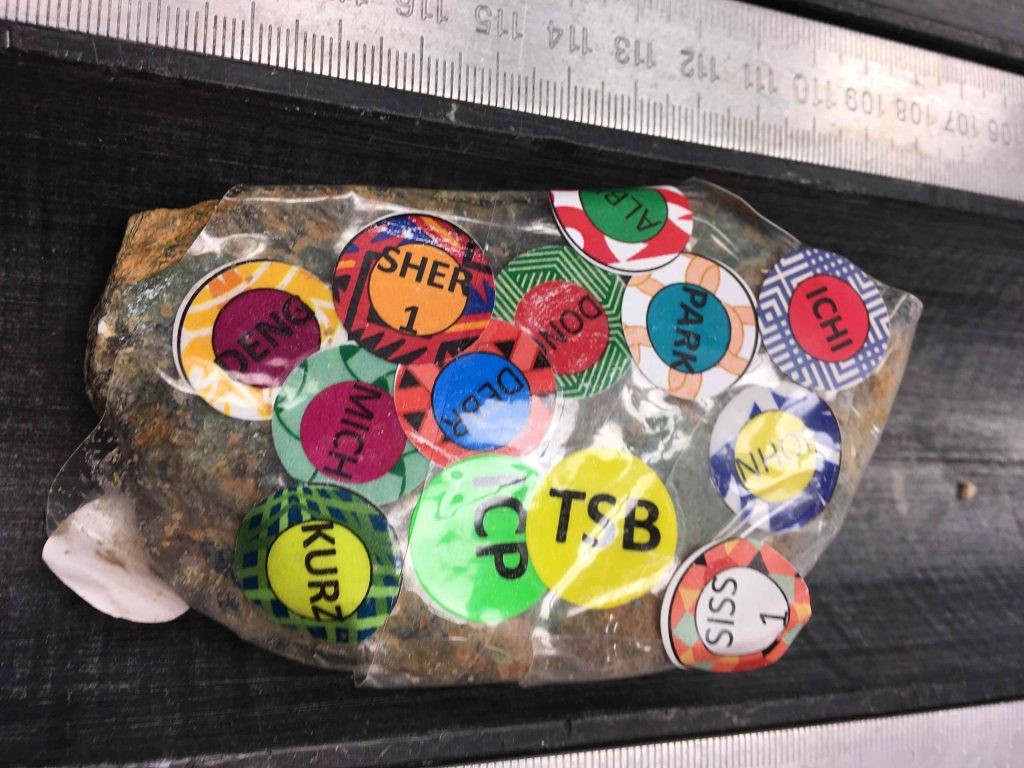 It’s been a busy number of days here on the JR since my last post! 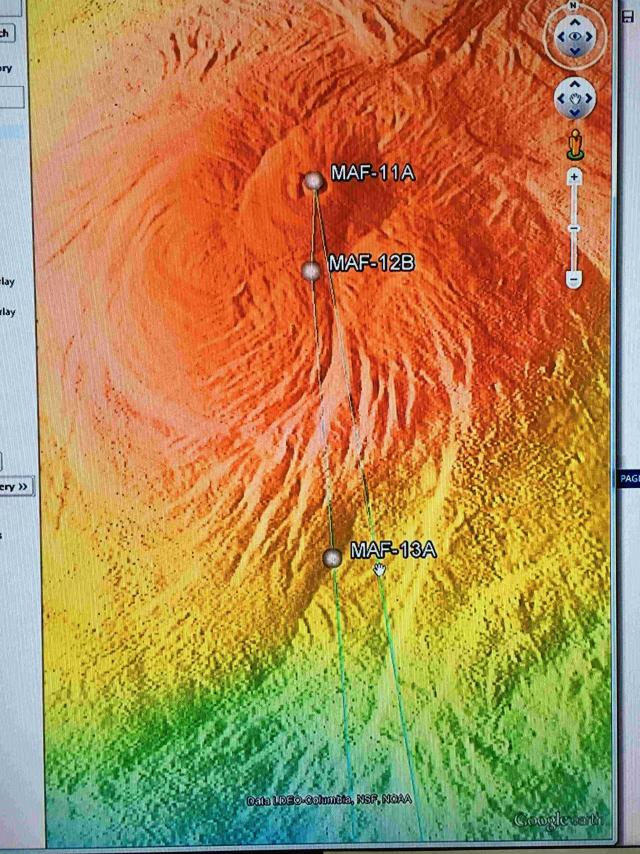 After a few more days of anxious anticipation of getting the cased hole at Yinazao completed, we finally pulled up stakes and sailed north for 13 hours (at the JR’s top speed of 12 knots!) to our next mud volcano target: Asut Tesoru (Chamorro for “Big Blue”) Seamount.  Consistent with its name, Asut Tesoru covers a lot of territory (our Co-Chief Scientist Patty Fryer offered in a crossover meeting that it covers the same area as Connecticut), and as such we have four different target sites we are seeking to drill, one after the other, moving from the seamount’s lower flanks (to sample what we hope are older mudflows and interlayered sediments) to its summit, where we expect (hope!) to drill an extremely young eruption that has created a mound right at the top of the edifice.

As I mentioned in my last entry, Asut Tesoru sits a lot higher on the seafloor than Yinazao – its lowest flank target site is shallower than the Yinazao summit!  So the coring is running much quicker now than before, which keeps you on your toes during the shift!  Also different are the kinds of rocks that are coming up.  We’re still getting blue serpentinite “mud” (really much thicker and stronger than mud or clay – it has bent a couple coring tools already!), but also a lot of other interesting things: 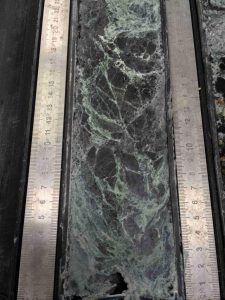 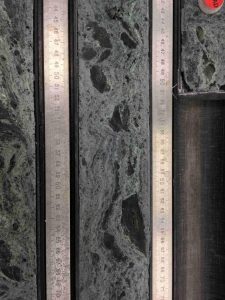 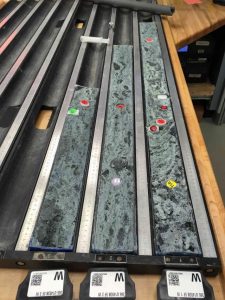 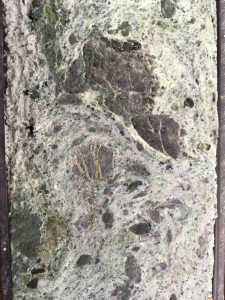 The big difference between these cores and those at Yinazao?  Lots more rocks in the cores, including some very fresh rocks (which are VERY popular wtih the shipboard scientists, as the teaser pic demonstrates!)   Now, while lots more rocks makes the scientists happy, it does hang up the drilling, and it makes my primary shipboard job – the preparation and squeezing of cores for porewaters – very slow and difficult.  So, here are how my days are running right now:

a) Ready for my shift by 11:15-11:30 PM, to “cross-over” with my day shift counterparts – basically catch up on what they’ve done and what will need doing on my watch. Quick breakfast before midnight.

b) On shift – usually to the call of “Core on Deck” for the first core of the first hole at the current Asut Tesoru site.  That core goes back to chill before extraction, trimming and squeezing – and about the time it’s time to start that, the next “Core on Deck” call comes – and I or my counterpart run up to the Core Deck for another core segment to squeeze.  This goes on pretty much until lunchtime at 5 or 5:45 AM – time variance related to helping out our E&O officers with a Q&A for a class that’s visiting via videocon (or for finishing a blog post…).

c) After Lunch:  the last core will still be squeezing (that one is always slow….).   So – sunrise! 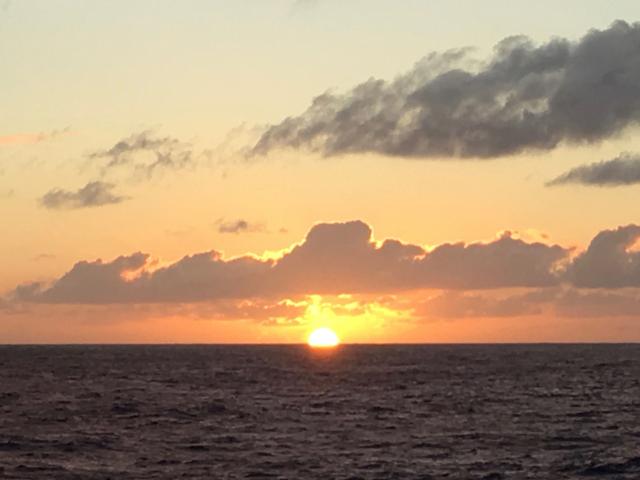 d) The core gets slower and tougher in the PM – not so much to squeeze, and what is squeezable is really hard so it takes hours….     Catching up on other data collection and analysis (we’re measuring a lot of rocks and serpentine muds for their chemical makeup on the shipboard ICP) and on report writing.

e) End of shift:  Dinner – and – Crossover Meeting! – in this order or the reverse, depending on what’s up in the lab. The noontime Crossover is a whole-team event, either in the Core Lab, where everyone gets caught up on what core has come in, what we think it represents, and whatever new data has been collected or discoveries have been made in the last 24 hours. 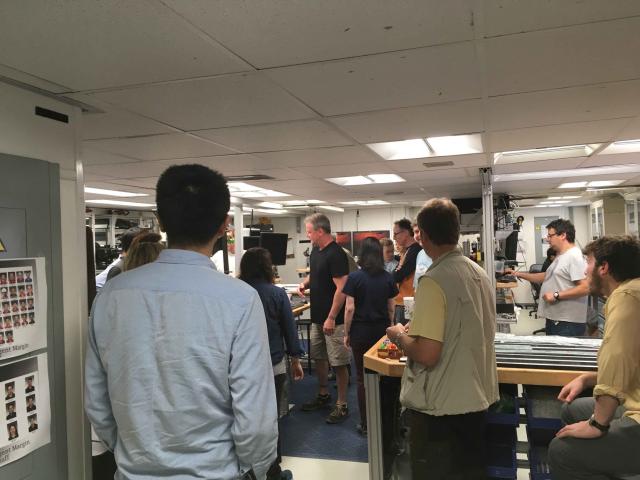 Here shortly we will head to the summit of Asut Tesoru, where the core will come fast and furious, and the holes will be considerably deeper, as our plan is to case the hole at the summit as we drill it, to save time and avoid the aggravation of our Yinazao experience.  Depending on how well that works, we may return to some of the earlier sites on this seamount for a longer-deeper visit.   We’ll see what happens soon enough!