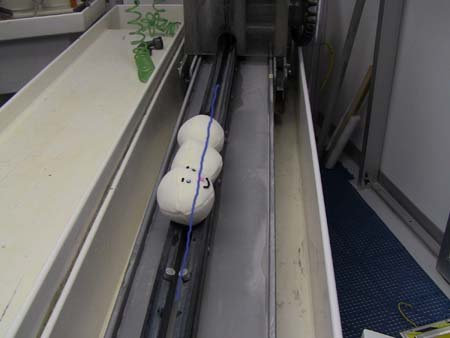 No, not me! What is this blue line on me? The ship has some scientists on board who specialize in how rocks form; they’re called petrologists. After the cores are brought on deck, it is the job of the petrologist to decide in which direction the rock core should be split lengthwise. The core is analyzed carefully and then a blue pencil line is drawn down the length of the rock to indicate where the rock should be cut with the rock saw. The rock core is usually not one long unbroken piece due to the drilling operation, so the broken pieces need to be cut individually sometimes. Small labels are then attached to them so that the pieces do not get out of order.

So I’m a bit concerned about the blue line that someone drew on me! I hope that there won’t be two of me tomorrow!