Not Me!!
We're Moving Again! 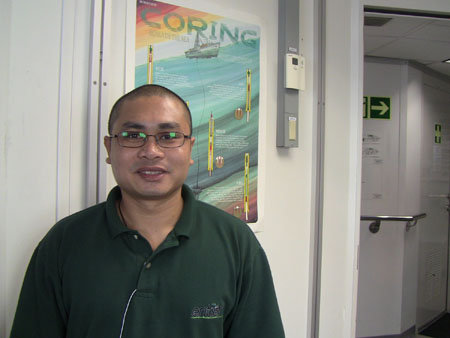 We started transiting to site 2 last evening about 9:00 pm and should arrive in approximately two days. This evening at midnight, the scientists will gather in the conference room to present their findings with regard to site 1. This morning the skies are clear and the sunrise looks great! Last evening we had a birthday celebration for Christopher Smith-Duque, one of the petrologists on board (photos below) and we all enjoyed some cake courtesy of the catering crew. Today, I am going to highlight one of the wonderful stewards on the JOIDES Resolution.

Leo Almendras is a steward on the JOIDES Resolution and has traveled all over the world. He grew up in the Philippines, which is still home to him. Leo has worked as a steward on many commercial ships and bulk carriers transporting such things as iron ore, coal, fruit, coffee, etc. These ships took him to places in Europe, North and South America, and Asia. Working on commercial ships from 2004 to 2008 has lead to him passing through the Panama Canal numerous times. Out of all the ships that he has worked on, he considers the JR to be the best. He says, "There is a lot more excitement." His job on the JR varies a little, which means that it doesn’t get boring. He cleans the Bridge, the hospital, and public areas on board but also gets to rotate with the other stewards so he sometimes is in the galley, and other areas. Leo’s favorite port is Hawaii. His work schedule is 4 months on, and 2 months off during which he returns to his home in the Philippines to join family and friends. He likes to go to the beach, visit friends, and go dancing when he gets back to shore.