Of Moholes and Men (Part II) 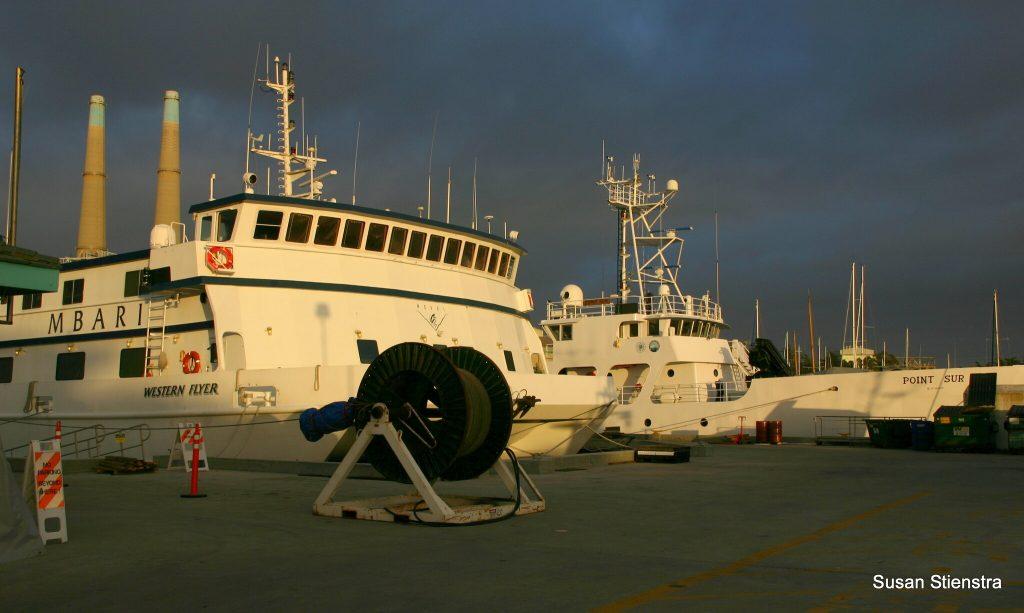 In my last blog, I wrote about how John Steinbeck had studied marine biology before dropping out of college to focus on his writing career. Over 30 years later he found himself onbard the CUSS I alongside the scientists of Project Mohole. How did that happen? It begins in Monterey, California, where he made a friendship that would change the course of his life.

If you’ve read Cannery Row, you’ll likely remember Doc, one of the central characters (if you haven’t read Cannery Row, you should. I wouldn’t even blame you if you dropped this right now to go find a copy and read it). Doc was a marine biologist with a little laboratory on the seashore that housed a menagerie of animals, live and dead. He was a friend to all, a wise soul that never made anyone feel dumb. He knew how to throw a party, and how to woo a lady. He swept through the tidepools almost daily to study the critters that lived there, and would get soaked up to his neck but hated getting his head wet, so he always wore a hat. The character of Doc is based almost word-for-word on a real man named Ed Ricketts. He and Steinbeck met in 1930, and became immediate friends, as close as brothers, until Ed died 18 years later.

Ricketts was a scientist who studied tidepool ecology. But he was also a philosopher, a wanderer, a music lover (especially Gregorian chants), and a college dropout (just like Steinbeck). When the two met, Steinbeck was still a young, poor, struggling writer living on a pennies a day in a bungalow near the sea. He and Ricketts spent many a day together discussing vast theories about life and love and history; collecting and dissecting ocean animals, and downing pints of beer. Legend has it that Rickets was fond of “beer milkshakes” – his doctor had encouraged him to drink more milk to soothe his stomach, so he started combining it with his drink of choice. He could never have imagined that future generations of marine biologists, artists, and free thinkers would make pilgrimages to his lab as if it were a shrine, and raise glasses filled with beer milkshakes to toast his memory.

Ricketts was the first marine biologist to publish a book (Between Pacific Tides) that ordered species based on where they lived in the intertidal zone, instead of just listing them alphabetically. He was one of the unsung founders of what came to be the field of Ecology – the study of organisms and their relationship to their environment. A few years into their friendship, Steinbeck and Ricketts concocted a plan to sail down to Baja California – aka the Sea of Cortez – for a few weeks, under the guise of a grand research expedition to explore tidal zones and discover new species and publish a book about them. During the trip they certainly worked hard and spent countless hours scouring tidepools to document and collect ocean specimens. And publish a book they did. They called it Log of the Sea of Cortez, and it contained a long and complete description of all the species they identified during their 6-week voyage.

But the book is much more than a species catalogue. It’s also a travelogue, a diary, a sometimes comedic and other times heart-wrenching reflection on life and culture and evil outboard motors. One whole chapter is dedicated to pontificating about what it means to ‘break through’ lower levels of existence and reach greater consciousness (this was Rickett’s personal life philosophy). In fact, all the actual science is at the end of the book. The rest is a deep dive into the minds of Ricketts and Steinbeck, whose thoughts seemed to overlap and merge.

“Everything is new about this, everything a discovery.”

Steinbeck had hoped to accompany Rickets on many more ocean expeditions, but fame pulled him on a different path. Grapes of Wrath launched Steinbeck into the limelight and into a solid writing career, with little time for oceanography. Steinbeck hoped that one day he could co-author another book with his dear friend, but this was never to be. Tragically, Ricketts was struck by a train one night in 1948 when his car got stuck on the tracks. He was rushed to the hospital and later died, before a devastated Steinbeck could get there to say goodbye.

Steinbeck mourned his friend’s loss for a long time. He definitely was never the same afterward, and he avoided spending time in Monterey from that time on. But Ricketts lived on as Doc, and as characters in many of Steinbeck’s other novels. For those wondering: his little lab still stands today, wedged between the Monterey Bay Aquarium and a fancy hotel smack dab in the middle of Cannery Row, and people flock to visit it and pay homage.

Steinbeck had lost a dear friend, but his love for the ocean never left him. So, when he had a chance years later to join the Project Mohole crew on their bold mission, he wasn’t going to pass it up. Finally, he could again take to the sea and feel that thrilling sense of freedom and discovery.

“This is an opening move in a long-term plan of exploration of the unknown two thirds of our planet that lies under the sea,” Steinbeck wrote in an article for Life Magazine. “We know less about this area than we do about the moon.”

Steinbeck documented the whole adventure: traveling to the project site amidst days of heavy wind and unforgiving waves; the ballet-like grace and precision of the drill crew as they worked hours on end to move the drill string down towards the seafloor; and the tense moments onboard as everyone waited to see if the plan would work and they would retrieve never-before-seen cores. This crazy scheme to drill into the seafloor had drawn media attention even before it started.

“We hear by radio that rumors are flying in the more nervous papers,” wrote Steinbeck. “We are suspected of 1) mining for diamonds, 2) surveying for future caissons in the sea bottom for permanent guided missiles, 3) looking for sunken treasure. They haven’t yet found a way to tie us to sex but they will.” It seemed that the public couldn’t fathom that a core of mud and rock was treasure enough for a group of scientists. The only diamonds involved were the ones used to create the $8,000 drill bit!

Project Mohole was remarkably successful. The crew ended up drilling down 600 feet. Though they didn’t make it all the way to the Moho, the drill passed through the top sediment layer into underlying basalt (volcanic rock), earth’s ‘second layer’, for the first time in history. Can you imagine how thrilling it must have been to open up that first core of basalt onboard and suddenly look millions of years into the past? According to Steinbeck, everyone on the ship, from scientists to drillers to cooks, was fascinated by the cores.

“The scientists are guarding the core like tigers,” he said. “Everyone wants a fragment as a memento . . . I asked for a piece and got a scowling refusal and so I stole a small piece. And then that damned chief scientist gave me a piece secretly. Made me feel terrible. I had to sneak in and replace the piece I had stolen.”

The upper green-grey sediments were over 20 million years old, from the Miocene era, and filled with tiny fossils. But the basalt was the real find. Besides being beautiful (“stark blue with extrusions of crystals”), it opened up a world of geological knowledge. Before this, no one knew whether it was possible for lava to flow beneath the immense water pressure of the ocean. Now scientists had proof that lava surely did flow beneath the seafloor.

As Steinbeck put it: “All new. A lot of textbooks will have to be re-written.”

The Way to Discovery Lies Open

Project Mohole captured both peoples’ imaginations and enough seafloor samples to flip geology on its head. But I’ll let you in on a little secret: 60 years later, we still haven’t reached the Moho.

It turns out that getting to Earth’s mantle is more difficult than even the most ambitious scientists at the time could have imagined. Technical problems, unpredictable drilling conditions, and lack of funding have all plagued the efforts of those who’ve dared keep the moho dream alive. If anything, though, these ‘near misses’ have only further encouraged intrepid marine geologists to complete Project Mohole’s mission so many decades later. It remains to be seen who will make it first, or where, or when, but it’s only a matter of time (and money).

While the original Mohole team dreamed big, they only made it a fraction of the way to the Moho. They did, however, find direct evidence for plate tectonics, a scientific breakthrough if there ever was one. Plus, Project Mohole paved the way for future ocean drilling research through some key inventions, including the dynamic positioning system that kept the CUSS I in place, and a lot of the gear required for successfully drilling with hundreds of meters of pipe, in thousands of meters of water.

The drilling process is still essentially the same today – drilling crews work around the clock in 12-hour shifts, stringing drill pipe together and sending it down to deep bore holes and piping cores back up to the ship for hours on end. Some of the challenges are also the same now as they were then: drill bits breaking (each bit, the piece that actually cuts through the hole, can cost several thousand dollars), corers getting stuck, unanticipated pipe trips that eat up time. But the thrill is also the same. What will the next core contain? What new things might we see that no one has seen before?

Steinbeck wrote of the Project’s significance, “On this first touching of a new world the way to discovery lies open.”