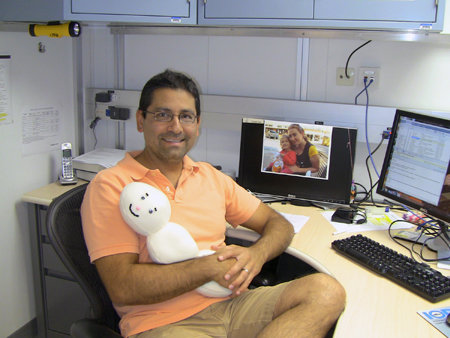 The staff scientist spends much of his time working in Texas at Texas A & M University where the Integrated Ocean Drilling Program (IODP) is located. He is responsible for planning and working with the chief scientists of each expedition. Today, we are going to learn about Carlos Alvarez-Zarikian.

Carlos was born and raised in Venezula, which is a country in South America. While in school, he spent some of his summers in other countries, such as Germany, the United States, and France. He was always interested in nature and wanted to be a marine biologist when he was young but this changed to oceanography by the time he was in high school. When it became time to go to college, his family encouraged him to enter the field of business but his love of the natural sciences won out.

Carlos worked for a Venezulan oil company doing microfossil work for several years and the decided to move to the United States and attend the University of Miami to get a degree in geology. He then earned a Masters degree and PhD in marine geology from the Rosensteil School of Marine and Atmospheric Sciences at the University of Miami. While he was at the University of Miami, he became involved as a consultant with an archeological group searching for the lost city of Helike in Greece. Helike was destroyed by an earthquake and tsumani in 373 B.C. In 2004, Carlos learned of a job opportunity with IODP, applied, and was hired. This is the 4th time Carlos has sailed on the JOIDES Resolution.

Now living in Texas, Carlos likes to spend time with his wife and 2 year old daughter and really enjoys photography.