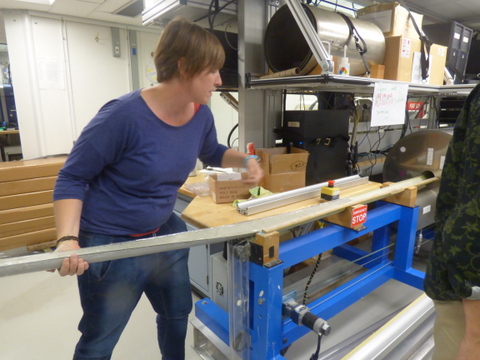 The last of the physical properties stations that the (archive half) core sections travel to is paleomagnetics, with the cryomagnetometer.  Remember back when we first looked at the whole round sections coming in from the catwalk, we learned they got analyzed for density, p-wave velocity, and magnetic susceptibility.  Well now those magnetic minerals get analyzed for their magnetic orientation.  Right now on Earth, compass needles all point north due to Earth’s magnetic field.  However, 800,000 years ago, compass needles would have pointed south, and at other well known periods of time Earth’s magnetic field did similar flip flops.  By mapping those changes in magnetic orientation of the minerals in our core sections, we can again have time markers to correlate with the sediment’s age.

Also, just like with sedimentology, sometimes climatic conditions can be inferred from magnetic minerals as well.  By looking at the curves of three well-studied magnetic minerals – magnetite, hematite, and goethite – indications of past climates can be extracted.  Similarly, by looking at whether alignment of magnetic minerals are scattered or all in one direction, the paleomagnetologists can make determinations about ocean bottom current strength and direction during that time period.