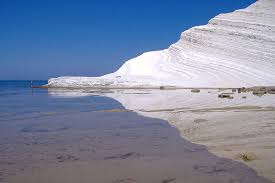 So now we come full round back to the microfossils, final stop on our core section’s age correlation path.  As I mentioned last week, there are three types of single celled microfossils; diatoms are silica based (their shells are made out of glass!), while nannofossils and foraminiferas are both carbonate (chalk) based.  Did you know that both the White Cliffs of Dover in England, and the Scala Dei Turchi in Italy are completely made of microfossils?

I already mentioned that microfossils help correlate age due to their known appearances and extinctions in time, and I hinted at their climatic storytelling abilities.  In fact, inference of climates is somewhat counter-intuitive at first.  Warm water loving microfossils here mean that since the water was warmer, there was more evaporation into the air, thus more rainfall on southern Africa, and so more lush, forested vegetation.  Colder water indicates less evaporation, less rainfall, drier conditions on land, and so a decrease in forests and an increase in grasslands and veldt.  These climatic conditions then get combined with archeological evidence of early hominids (human ancestors) and we can map our rise in history all from studying ocean mud.  Pretty remarkable!

But the real reason for ending with paleontology, having started with it, is so I can share some of my favorite SEM photos.  Remember, these are all sand-grain sized single celled organisms.  Be amazed and enjoy.