Meet Another Scientist
The Study of Rocks 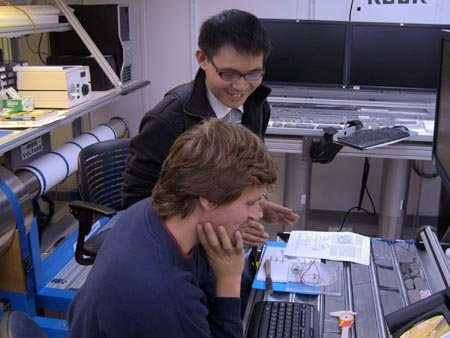 There are several petrologists on board Expedition 329. For those who may not know, petrology is the study of how rocks form. Petrologists observe the details found within a rock to decipher its past history. Details include things such as the color of the rock, the size of mineral crystals within the rock, the arrangement of the crystals, and alterations that have occured since the rock formed. Good observational skills are required in order to see some of these details that the average person would not even notice.

The petrologist has several tools, besides just their eyes. One of the more obvious ones is a magnifying lens, often used out in the field but also very useful in the lab. Another very useful tool, especially for identifying mineral composition is the microscope. The rocks are sliced so thin that light passes through them for microscopic work. The process is facinating and will be described in an upcoming blog about the person on board who makes these. A high tech tool known as x-ray diffraction or XRD can also help with mineral identification. A sample of the rock is bombarded with x-rays and these rays are then diffracted or scattered in a particular pattern, which can be used for identification.