Physical Properties of a Core: Double the Data 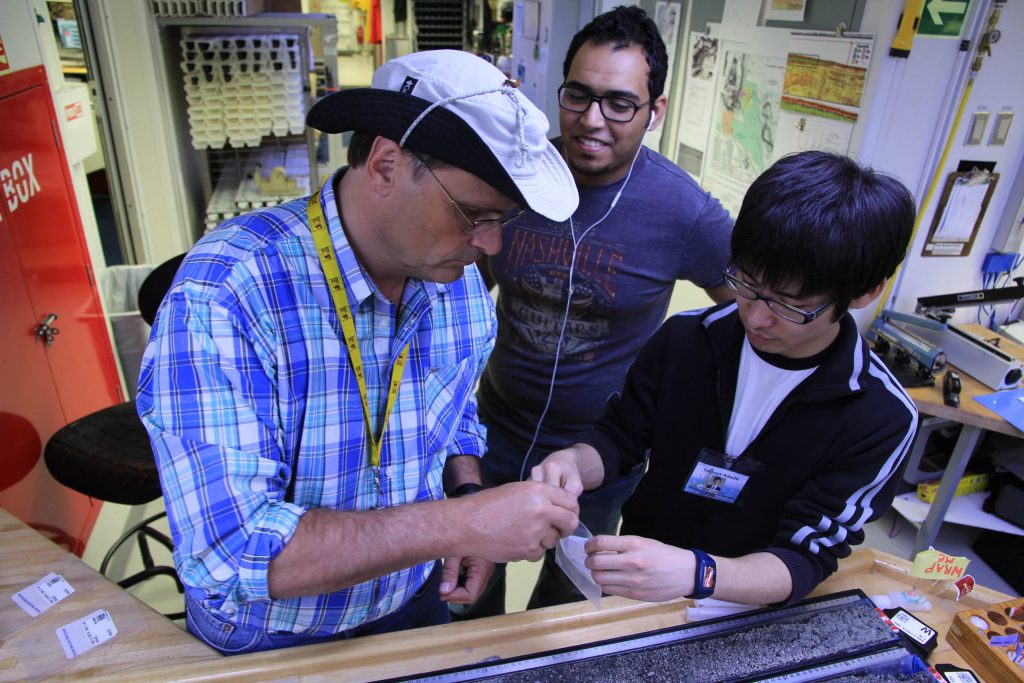 The Physical Properties of the seafloor formations (structural geology) describes the rock or sediment type and what conditions were like when the rock was formed as well as what has happened to the rock through time. There are six structural geologists who are measuring the physical properties of cores retrieved during Expedition 340. The physical properties are measured from whole cores, the working half of cores and by taking discrete samples from split core sections. Enjoy meeting these 340 Ocean Detectives and discovering the variety of measurements they take each day in the JR Core Lab. Thank you to Daisuke Endo, Takeshi Saito, Anne Le Friant and Etienne Claassen for sharing their photos in this blog.

340 Ocean Detectives, Tatsuya Adachi and Michael Manga, are the first scientists to take measurements of the cores (whole cores). They measure the density, temperature conductivity, magnetics, and natural radioactivity of the core. The water content (bulk density) is measured using gamma ray attenuation (the number of electrons lost when rays collide with sediments in core). Sound waves also help to measure density of the sediments. Seismic waves called P-waves travel through the core at different speeds depending on the densities of the rock forming minerals and the fluids that fill the pore space in between sediment grains. To understand the type of material in the core, the natural gamma radiation (NGR) emitted from the sediments is measured based on the amount of potassium, uranium and thorium in cores. This helps to measure clay minerals (potassium and thorium) and the source rocks (elevated uranium) in cores.

340 Ocean Detectives, Sara Lafuerza and Martin Jutzeler take measurements from the working core half. Some of the physical properties they measure are how sediments respond to pressure (bulk elasticity), how strong the sediments are (using a penetrometer), and how resistant sediments are to movement (shear strength). Knowing the strength of the material is important to understand how resistant the material is to movement, for example down a slope (gravity) or along ocean floor (currents).

340 Ocean Detectives, Christoph Breitkreuz and Matthew Hornbach take measurements from the working core half. They conduct moisture and density (MAD) analysis from small samples of the core. These include the moisture content, bulk density, the density of sediment grains, and porosity (spaces between the sediment grains). This all helps to describe the overall volume and mass of the seafloor formation.

How well the cored material holds heat is also important to describe the properties of the formation, this is called thermal conductivity. Temperature in the Earth increases with depth. The type of fluid or gas contained in the pores of rocks or sediments affects thermal conductivity. There is also a blanketing effect when base rock (crust) is covered by younger sediments/rock such as the submarine deposits being sampled during Expedition 340 that are overlying the crust (base rock).