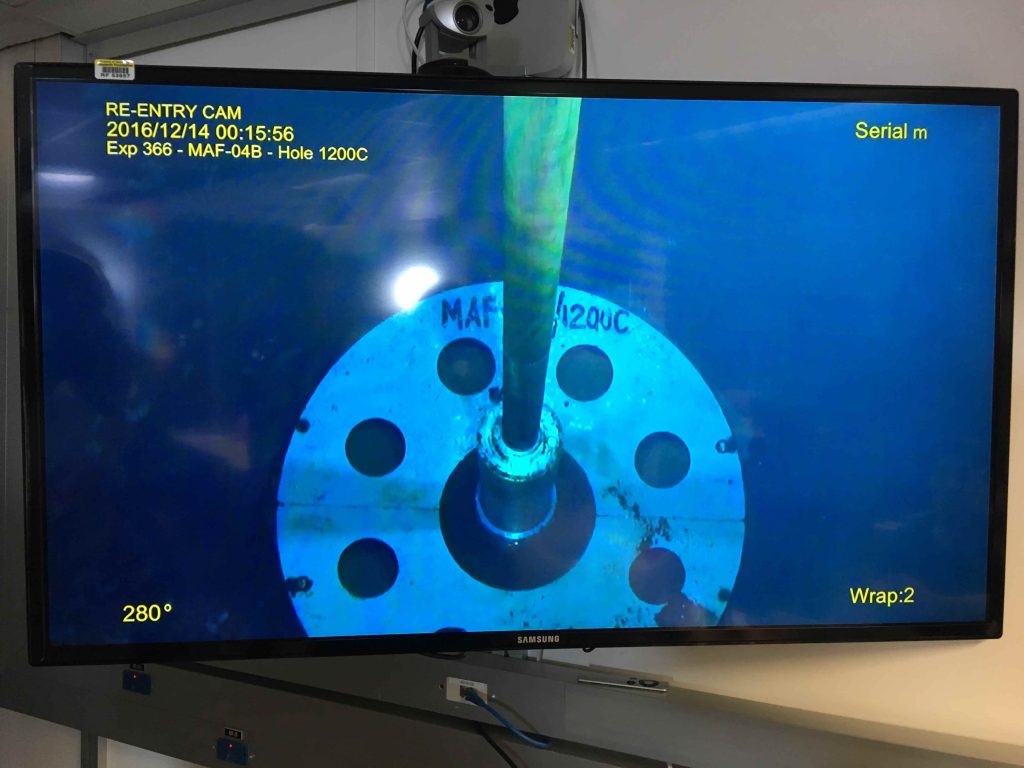 Currently, we’re sailing for Yinazao (formerly Blue Moon) Seamount after a partly successful endeavor to un-CORK (i.e. remove a CORK-type fluid flow and analysis instrument package) from Site 1200 on the South Chamorro Seamount, that had been there for 15+ years since it was installed on ODP Leg 195.

So, how do you pop a CORK?  On the JR,  this involves stringing together just short of 3000 meters of drill pipe (it comes in ~10 meter lengths, so we’re talking ~300 lengths) which basically hangs from the 200 foot drilling derrick in the center of the ship.   At the end of the pipe is a “catcher” designed to grab the CORK: 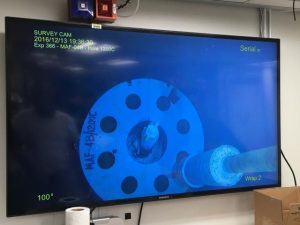 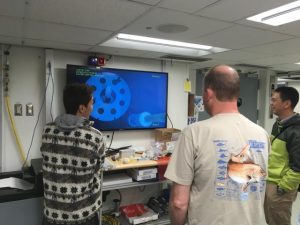 Now, this catcher is maybe a meter wide, if that.  The ROV platform that was put onto the site during the installation of the CORK is ~3-4 meters across or thereabouts.  The JR drilling team was able to (very routinely!) thread their 3 kilometer “thread” of pipe into the “needle” of this CORK assembly, all while controlling the position of the vessel (and the pipe!) with only their lateral thrusters (handled by one person in the control room on the bridge) and the vertical controls on the drilling rig (handled by the drillers on the rig floor).  So – the reason we spent a good bit of yesterday standing in front of video monitors in every lab on every deck watching the drillstring dance around and finally grab onto the CORK assembly is, simply, that what they’re doing is really unbelievably difficult – and they make it look easy!

I noted above that the un-CORKing was partly successful – and this is because only part of the CORK could be pulled out and brought back to the ship.   We’d been warned in our science team meeting not to be too terribly optimistic about the CORK retrieval effort (half of them fail entirely), so the fact that half a CORK was getting pulled onboard was cause for excitement from our microbiology colleagues, who had been preparing feverishly in anticipation of this sampling opportunity which could easily have not occurred – so when it got on the deck (while I was sleeping) they had a micro-bio sampling party of sorts, which had them all looking very happy with life when I got up, the rolling of the ship during our transit to the next site (and first drilling site!) irrespective.

For me, however, the first several days of our voyage have been rather quiet, what with the completion of reconstruction in the Core Lab slowing down the setup of the pXRF there, and the frantic preparations of microbiologists sort of burying the Geochemistry Lab in vials and centrifuge tubes and newly made bottles of treatment solution to ensure that any DNA or like material encountered in any pore water or serpentinite will be properly preserved for onshore analysis. So, I have returned fondly to an old habit: 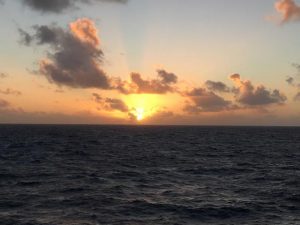 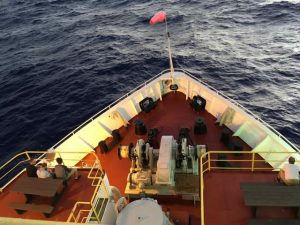 There have been two sunrises to watch thus far – both with a rim of low clouds on the horizon that give it the sense of exploding from the water.  The JR is well equipped in terms of viewing stations: nice bleacher seating when it’s off the bow, and of course the Steel Beach (which has reclining lawn chairs).