Rads and Forams and Drills, Oh My! 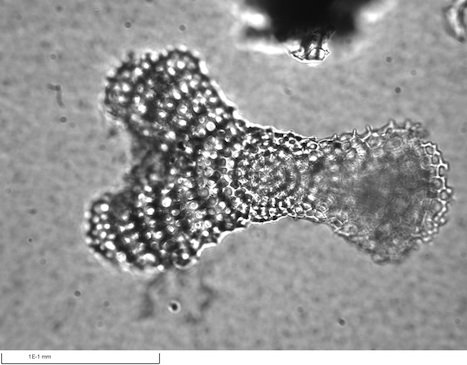 Off the western coast of Costa Rica, in the Pacific Ocean. Our coordinates are still N 8o36 min, W 84o4 min. The ocean here is the calmest seawater that I have ever seen! Yet another incredible sunset to end the day. From the bow…

Scientists at Work
The core drilling continues to be a problem.  The next core is expected now Sunday or Monday.

Meanwhile…the nanofossil group on the ship has been working very hard to characterize the sediments in the previous core.  Using their spiffy microscope cameras, they have been photographing the tiny fossils they find.

Two organisms found in these sediment cores are radiolarians and foraminifera.  Radiolarians (or Rads, as the scientists say), are a marine zooplankton protozoa (one-celled prokaryotes) that make intricate skeletons. They float around the ocean, and have for millions of years.

Scientists know this because their skeletons are found in very deep sediments over large portions of the ocean floor, current and past, since Cambrian times. Scientists have been studying their beautiful fossil shells in sediments since the 1800’s, when they used to draw intricate sketches of the structure. (see Kunstformen der Natur, from the early 1900’s). Foraminifera (means “Hole Bearers” for the small holes in the shell) are another marine plankton that make intricate shells made of calcium carbonate.

Their shells are usually less than a mm in size and can have multiple chambers and become quite elaborate.

There are close to 300,000 species of “forams” either still living or found as fossils in sediments once covered by water. They also belong to the Protista classification and their species goes back to the Cambrian period

Scientists can look at the isotopes in their shells to determine the age.

These two groups are called “biomarkers” because they change through time in a well-studied manner according to the temperature of the seawater and other factors when they were alive.  With this information, scientists can get an idea of the age of the sediments in the layers of a core, with the oldest at the bottom, and getting progressively younger as they go up towards the top. Many ancient structures are made of limestone, which is usually made of forams, and can be dated using the same techniques as for sediment cores.

Life on Board
My office is on the port side on the “Poop and Forecastle Deck” (go figure!) and there is a nice covered walkway outside my window where people often stand to take a break and watch the view.  Today, I was working on the computer when someone banged on my window.  It was one of the staff, who gestured at me to come outside.  I grabbed my camera and ran for the door. There was a sea turtle slowly paddling around about 20 feet from the ship, and there was a sea snake hanging out with it, too, I guess hoping to catch some leftovers of whatever the turtle was eating. You can’t see the snake in the picture because it is too small, but it was definitely trailing around next to the turtle!

We had a planned fire drill this morning at 10:30.  At the signal, everyone grabbed their safety helmets, protective eyewear, and donned their life vests and moved quickly to their assigned lifeboat station.  I was hoping to get to go into the life boat, but they just lowered them and then raised them without us.

From the Pacific Ocean, west of Costa Rica…