Rads and Forams and Drills, Oh My!
Red Seas and Boreholes! 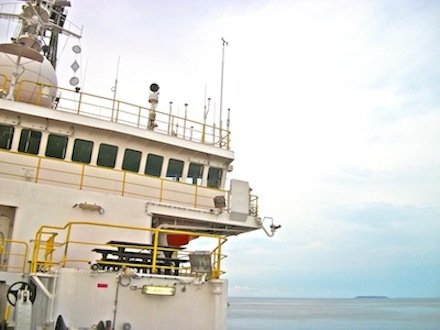 Off the western coast of Costa Rica, in the Pacific Ocean. Our coordinates are N 8°36 min, W 84°4 min. The ocean had more energy this morning with a bigger swell under stormy skies, but has calmed down again and returned to very calm seas and flat grey sky. The Isla de Caños is off the port side of the ship, and a great deal of the coastline of Costa Rica can be seen.

Scientists at Work
Scientists are eagerly awaiting the next cores and filling their time with planning meetings and discussions about the previous cores.

In the Core Lab, when a sediment core is analyzed, a 1.5 meter segment is split into two long core halves; one half is used by all of the scientists that want a sample, and the other half is “archived” or saved, for an undisturbed record. It is the archived core half that goes through an instrument called the Superconducting Rock Magnetometer, or SRM, in the Paleomagnetism area of the lab.

The SRM does not destroy the material of the core, but gives information about the Earth’s magnetic field at the time that the sediments fell to the sea floor.

I got the chance to speak with UC Santa Cruz paleomagnetist Dr. XiXi Zhao today about how paleomagnetism is used by scientists to help them understand Earth’s history.

The inside of the SRM contains liquid helium, which keeps the temperature at about 4.5 K. That’s – 451° F!  This low temperature allows the core material to become a superconductor so that accurate magnetic measurements can be taken using the SQUID (Superconducting Quantum Interface Device) without harming the core.  (Gotta’ love those acronyms!)

Life On Board
Flying Fish and Dolphins!

Last night, standing outside on the Main Deck after dark, flying fish were flyin’!  Apparently (as told to me by the more experienced sailors) there were many predatory squid in the water, and the flying fish were trying their best to get away from them. It is not really flying, but rather gliding after self-propelled leaps out of the water using their long fins to glide once airborne. They have been documented “flying” up to 150 feet!

A large pod of dolphins frolicked around the JR this afternoon, circling the ship.  They were too far off to get any good pictures, but they were amazing to watch in the flat, calm ocean.