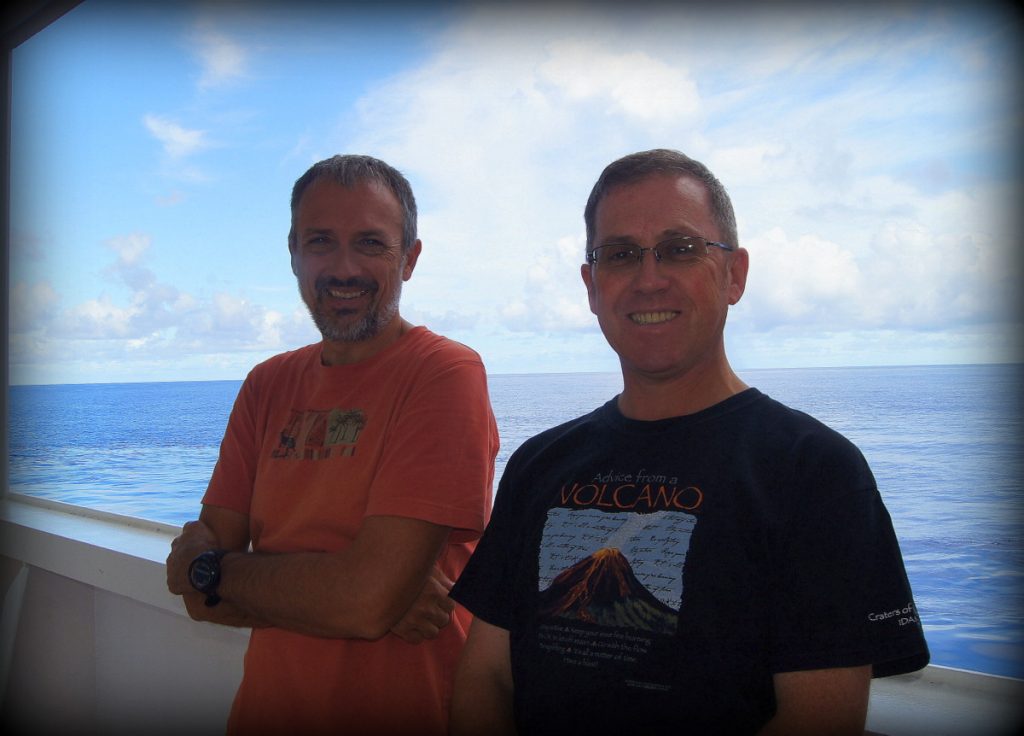 When you consider how much magmatic activity occurred in the Izu-Bonin-Mariana forearc, the core from which we intend to gain so much historical geologic information may seem disproportionately small in comparison.  We collect cores no bigger than 60-62 mm (less than 2.5 inches) in diameter, which provide a very limited, but representative, view of the surrounding rock.

The structural geologist’s job is to make it easier to discern how this core fits in the bigger picture.

Overall, the drilling process causes rocks to rotate within the core barrel so, as much as possible, the goal is to re-orient the rocks the way they were prior to drilling. To complicate matters further, natural deformation or breaks, faults, and cracks cause the rock to come apart, giving us many short or broken sections of core.  To determine how the rocks lie horizontally, we use data from the paleomagnetic team.  Since the rock captures and retains a magnetic record of when it was formed, the paleomagnetists can tell us where magnetic North was at the time of formation.  Data from instruments we place in the hole once we stop coring also help.  The vertical orientation, however, is determined on the core deck; any rock the diameter of the core barrel could not have turned upside down, so technicians mark its top and bottom as soon as they touch it.   Smaller pieces of rock that would tumble around within the barrel are not marked, but kept in their original order from other pieces.

Expedition 352’s structural geologists, Eric Ferré and Walter Kurz, are the first scientists to touch the core and they mark the rocks for cutting. When determining how to slice the chunks of rock in half so that one is “archived” and the other can be sampled, structural geologists have to think about a number of things. First of all, the archive and working half should be as symmetrical as possible.  This is sometimes difficult if a certain piece of the core warrants a special request for analysis.  Eric and Walter try to meet the needs of the other groups whose analyses help build part of the larger picture.  The path of the veins in the core must also be taken into consideration when splitting the rocks.  Cutting the vein in the right place gives them the ability to measure the angle of vein orientation and the minerals crystallized within the rock. The veins can tell us a little about the hydrothermal activity within the rock, and also the direction and type of stresses on the material.  Interestingly, the patterns of the vein angles seem to show that, rather than tectonic forces, the combined weight of the rocks plus pressure transmitted through fluid cause the rocks to break.

Looking at thin sections of the core under a microscope can also help reveal some of the structural history.  Within a vein, there are often small fragments or minerals that are not from the “parent” rock, illustrated by their different colors or textures.  The veins may contain clasts (broken pieces of other rocks) carried by hydrothermal fluids and locked in place when the minerals crystallized telling us some big shear forces took place. In essence we have a fairly “quiet” core, Eric explains—the igneous rocks we’re seeing are more homogenous than expected for a site right above an active subduction zone. Although it might be interesting to see breaks and shears in the core, it’s possible just a few miles away it could look totally different. After all, we are just getting one 60 mm wide view of a vast ocean floor.