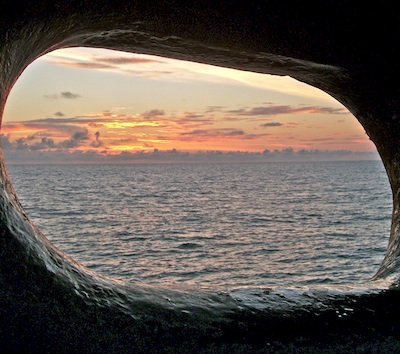 Where are we now? Off the western coast of Costa Rica, in the Pacific Ocean. Our coordinates are N 8°36 min, W 84°4 min. Very calm water greeted us this morning, and the sky is a patchwork of blue with white clouds – perhaps rain later…sunset through a rope hole on the bow was spectacular, as usual!

We are having an algal bloom in the water, with rusty brown clouds of algae floating all around the ship and off into the distance that make the ocean look like a puddle in the middle of a dirt road.

Erik Moortgat, one of our chemistry technicians, was kind enough to get a bucket sample so that we can have the chance to take a look at these organisms under the microscope.  The water here is very warm, about 82 °F, or 28 °C.

This morning, the much-anticipated arrival of the drill bit at the seafloor was the topic of interest.  Using a feed from the camera attached to the end of the drill, we watched the Captain use incredible skills to maneuver the drill into the top of the re-entry cone, which is a large funnel-shaped apparatus with approximately 12-foot diameter that can be deployed through the Moon Pool to the bottom of the ocean (see blog dated November 1).  The re-entry cone is resting on the bottom of the ocean about 500 meters down…so he is guiding about a third of a mile of pipe hanging from the bottom of a ship floating on top of the ocean, trying to hit a re-entry cone with a diameter of approximately 12 feet! WOW! To make matters worse, in the video feed, we could see that the re-entry cone had been almost completely filled in and obscured with sediments.  And he hit a bulls-eye!

Soon, hopefully, we will see if the attempts to shore up this borehole are successful and we will hear over the loudspeaker, “Core on deck, core on deck!”

The pipes used in the coring are very carefully arranged on the rig floor which is covered with pipe rackers to store the pipes.

One section of drill pipe is called a joint, and measures 9.5 meters long (about 31 feet) and weighs…a lot! (874 kg or 1925 lb). The crew puts three sections together at a time and this group of three is called a “stand.” The crew attaches a drill bit on the end, and begins the process of lowering the first stand through the Moon Pool.

On the rig floor, a huge machine called an iron roughneck starts connecting these stands of pipe, one at a time as they are lowered through the pool, and on to the sea floor, attaching new stands as each one ends until they have reached the bottom of the ocean.

The camera apparatus also has the last set of Styrofoam cups attached to it, so students that have been waiting to see their cups will get their chance soon!

There will be a little cup contest where the scientists will pick the best cup in three categories: Elementary School, Middle School, and High School once all of the cups are rinsed and dried. The winner in each category will get an Expedition 344 patch!

From the bottom of the sea, west of Costa Rica…