Science at Sea
Adriane Lam: The tool I can’t live without and use daily? A paintbrush.

“Finding the submerged continent of Zealandia.” Now 5 months later, at the midway point of the expedition, Jerry goes under the pump again, to answer your questions.

Reddit AMA session on Sept 1 at 5pm-7pm EST. Dr Gerry Dickens, talks about ocean drilling and “Zealandia” From onboard the JR

Some of the leading questions from AMA session in March 2017.

Zealandia is a large region in the southwest Pacific Ocean underlain by continental crust. It includes New Zealand and New Caledonia, but also extensive regions underwater, such as the Lord Howe Rise, Challenger Plateau, etc.

Why is it mostly underwater?

What does this tell us about Earth history?

This is a great question, one partly addressed below. At the really basic level — how can a continent become so thin during rifting that it remains mostly submerged? This is a real challenge for the community that studies plate tectonics.

Why is Zealandia interesting for climate research?

One of the great problems in current Earth Science literature is the Early Eocene, nominally 50-53 million years ago (Ma). This is because Earth surface temperatures were nominally 10-12°C greater than today, and exceptionally warm at high latitudes.

All explanations to date involve elevated atmospheric pCO2, but the extreme high latitude temperatures remain an issue, even after considering differences in albedo (little or no “white” reflective ice at the poles during the early Eocene). Quite simply, our community has not been able to replicate such temperatures using climate models. There is also the issue of why pCO2 was so high.

The most difficult early Eocene temperature records,  account for are those generated from within and around New Zealand. Not only does the submerged portion of Zealandia have many early Eocene sediment sequences, but the past location and water depth of Zealandia may explain much of the data-model issues.

It is also possible that the tectonic history of Zealandia directly relates to the high pCO2. Notably, when Zealandia stopped separating from Australia (~53-50 Ma), subduction of began on the western side of the Pacific Plate. This subduction is mostly under oceanic basalt, rather than continental crust.

I should emphasize here that I when I state there are major problems in data-model comparisons for early Eocene climate, this is not a knock on either. It is simply that we cannot explain the available data with available models.

How long ago is this continent estimated to have gone underwater? Based on that, what evidence are you most hopeful to find to help answer that question?

Clearly, portions now remain above water — New Zealand and New Caledonia. But much of both these areas have also been underwater in the last 80 million years. One only needs to travel around the South Island of New Zealand or New Caledonia to realize that much of the “landscape” is now uplifted “submarine” rocks.

Then there is the cool issue that places like Lord Howe Rise (now almost entirely underwater) have features that look like they were formed by subaerial exposure in the Eocene. The history of Zealandia, and particularly when it went “up and down” is very much a primary goal of the upcoming drilling in Expedition 371.

What is your one burning question that you want answered from JR Expedition371?

Find out the answers in Reddit AMA session on Sept 1 at 5pm-7pm EST.

Dr Gerry Dickens, talks about ocean drilling and “Zealandia” From onboard the JR 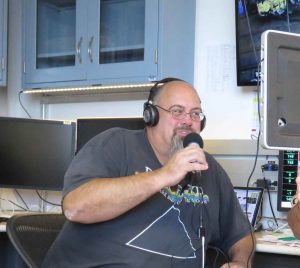