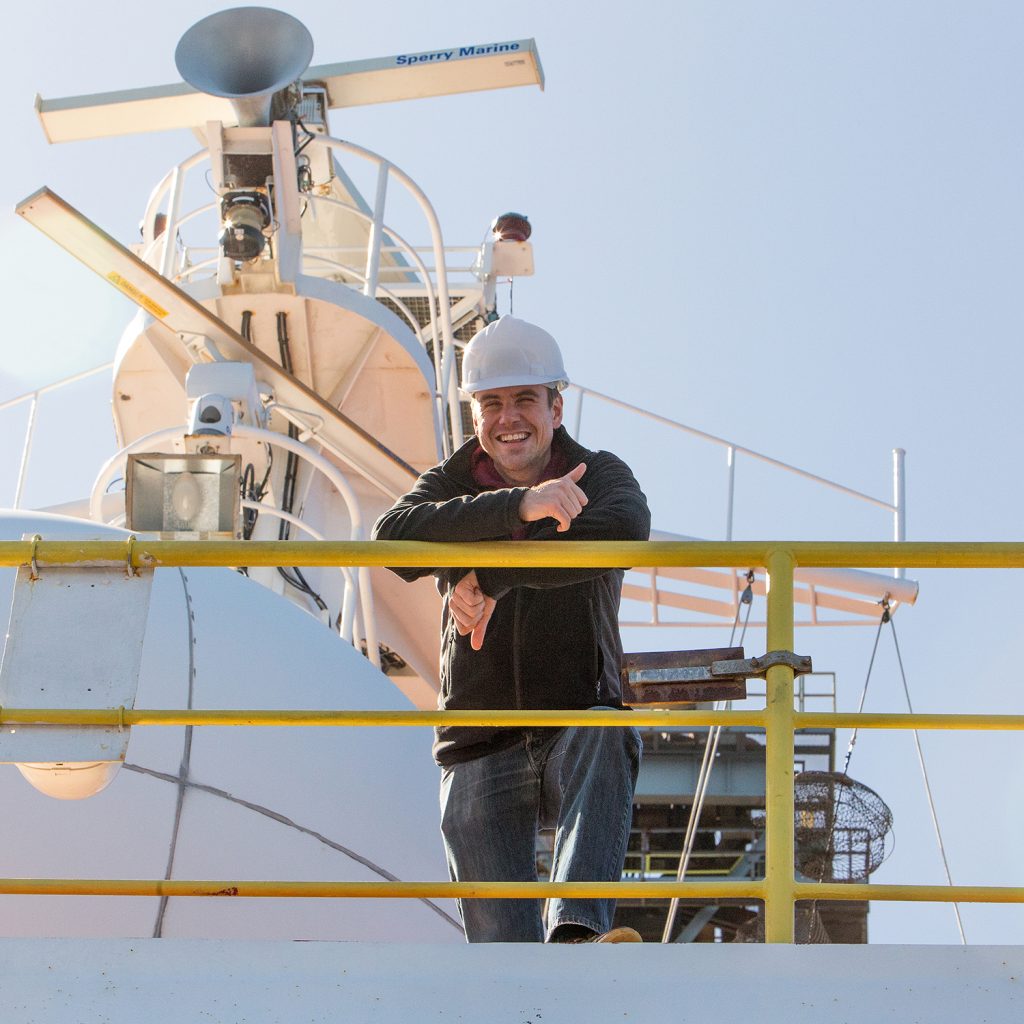 Science used to be so simple. There was a time when you could just walk down the street, look at a rainbow, and discover refraction, or gravity, or calculus or something. But nowadays most of the big obvious stuff has been discovered already, and modern science often involves things too tiny, or huge, or invisible to research without specialized equipment.

Luckily, some of that specialized equipment is SUPER RAD. Here’s a review of some of my favourite gadgets onboard the JOIDES Resolution.

You’ve probably seen the pictures produced by an SEM before. It bounces a beam of electrons off an object to create a clear image of its surface. Depending on what you’re scanning, some objects need to be covered in a fine layer of gold first, through a process called “sputtering”.

I had assumed these machines were huge and complicated, but our onboard SEM is not much bigger than a PC, and has the control scheme of an etch-a-sketch. Within minutes you can get a clear picture of a creature the size of a grain of sand, and then zoom in for a look at the creatures that live on that creature!

Coolness rating: 4. If I had one of these at home I would spend all day examining the fluff that collects between my toes. But now in greater detail! 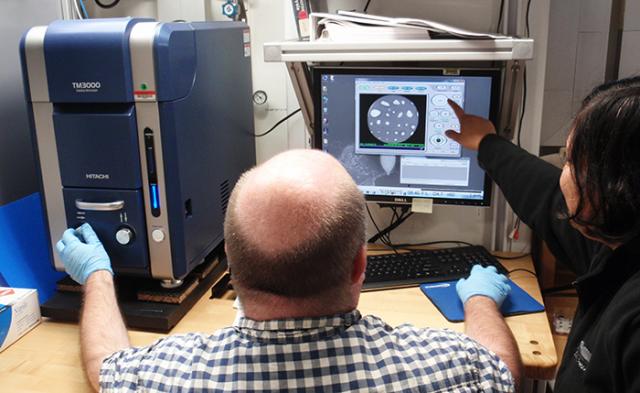 Now THAT is an impressive name. It sounds like it uses soundwaves to explode things from a distance! I bet everyone needs earplugs when we’re powering up the dismembrator, right?

Well, no. It’s a little stick, you poke it in a tube of suspended particles and it mixes them up really well with high-frequency vibration. It’s probably really good at foaming milk.

Coolness rating: 1. Just for the name. 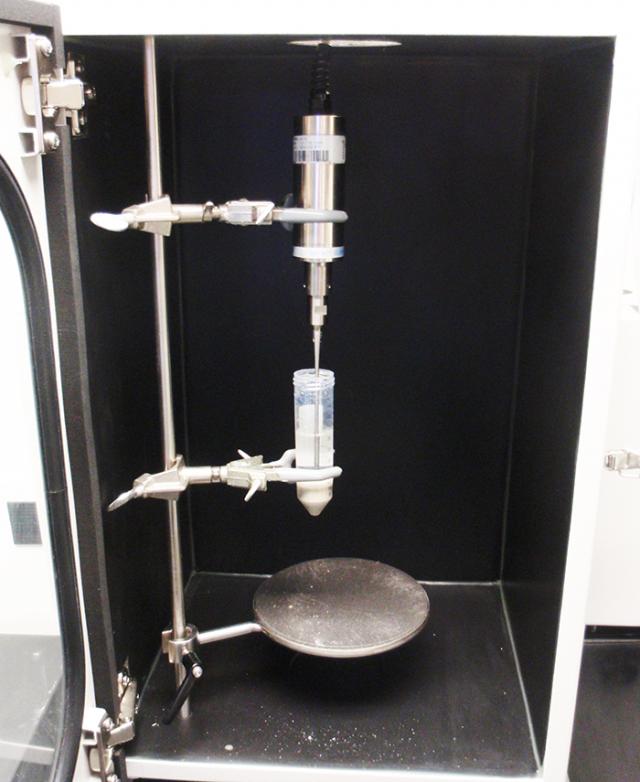 They sound like a duo of henchmen from a Saturday morning cartoon, but these are actually both machines designed to crush rocks into tiny pieces. And they work basically the way you’d assume. X-Press uses hydraulics to squeeze things really really hard (safely applies up to 8 tons of pressure!) and Shatterbox is like a small tough washing machine, which smashes up rock fragments with heavy cylinders.

Coolness: 2. Grind your beans with the Shatterbox, squeeze some X-Presso, and use the Dismembrator to make one smooth science-latte.

Once your rocks have been sufficiently powdered, the next step is usually to pop them in the X-Ray diffractor. Since this uses potentially hazardous x-rays, all the samples are placed in the safe box at the front, and a robot arm brings them into the shielded chamber where the science happens. The sample is X-rayed, and the angle and intensity of the diffracted photons tell us what the material is likely to be.

Also it’s been dressed up to look like WALL-e.

Coolness: 3. X-rays are cool, automatic robot arms are awesome, and dressing up science equipment to look like adorable cartoon robots is the best. 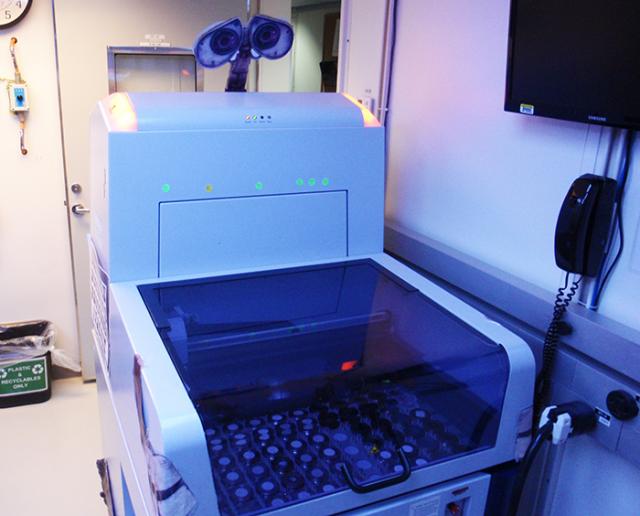 Unlike the Dismembrator, this thing fully lives up to its name! It’s a monstrous piece of gear, a four metre long set of mysterious chrome tubes, helium cooled, full of electromagnetic equipment.This is our onboard palaeomagnetists’ signature tool. By running core through the Magnetometer, they can analyse the intensity and orientation of the earth’s magnetic field at the time when the sediment was laid down.  This is really useful for finding out how old the cores are, or ruining credit cards.

Coolness: 5. Probably the most impressive piece of equipment in the core lab! 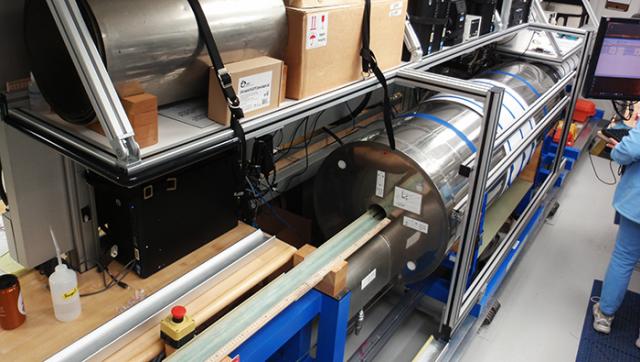 Soft-serve dispenser
This machine uses a vapour-compression cycle to lower the thermal energy of an emulsion, combined with internal augurs to prevent excess crystallisation. The mix is aerated and extruded, at which point the sugars can be rapidly converted into Adenosine TriPhospate for an immediate increase in cognitive function.
And it sometimes comes in chocolate!
Coolness rating: 4. Unlimited soft-serve icecream is something ALL branches of science can agree on. 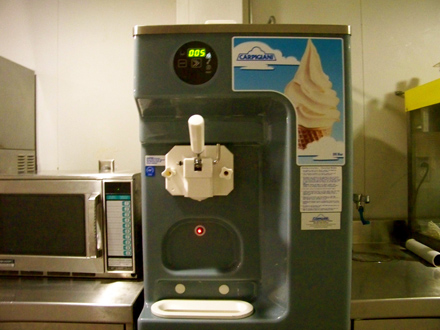 What’s that softy? I deserve another? Well, I can’t say no to that glowing red eye.
Exp356
23
Aug 2015
By Tom LangUncategorizedLeave a comment