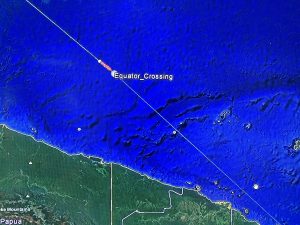 Why is this a big deal for the rockers? Because for a sailor who has never crossed the equator this marks his or her transformation from a “slimy pollywog” (one who has not crossed the equator) to a Trusty Shellback; also called a son or daughter of Neptune. A special “crossing the line” ceremony is typically observed with previous Trusty Shellbacks organizing a Court of Neptune to test the pollywogs. This nautical ceremony is a centuries old naval tradition and acted as a ship morale booster and also as a test to mark a mariner for seaworthiness. The pollywogs were (are) subjected to a two-day ordeal of physical hardships in the spirit of initiation as they are inducted into the “mysteries of the deep.” Ask anyone who has served in the Navy or Merchant Marine and I’m sure they will have stories to tell about their ordeals to become a Shellback.

Well the ordeal for the Rockers began tonight with; Beef Wellington… and lots of it! Also all you could eat sushi too! And the variety of deserts… well wow is the best description. Rocker tummies are in pain from all that food! Some rockers in the spirit of the ordeal stood on the pilot house roof, facing the wind and falling rain, looking to the horizon for the red line in the ocean that marks the equator; but alas it was not to be seen. Tomorrow Captain Skinner promised the rockers on the second day of the ordeal a suitable ceremony to receive cards certifying their membership in the court of Neptunis Rex! 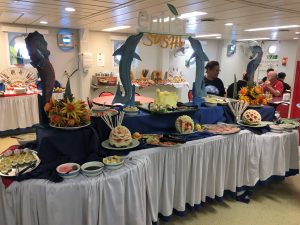 Well if you are not a monkey wrenching gear head read no further. Today the rockers broke into groups for 2.5 hours tours of the machine called the JOIDES Resolution. I describe it like that because a working deep ocean drill ship is a giant, powerful, sea going contraption where the humans crawl about it tending to its whims and needs. Catwalks, ladders, rigging, etc are not convenient for humans, you have to pay attention moving about the ship or you will get hurt. The external and internal areas outside the lab stack and “hotel” are all about moving 470 feet of steel through the ocean at 12.5 kts. AND drill thousands of meters deep into the earth’s ocean crust. This requires heavy duty gear and highly dedicated and trained people, with all types of skills, working as a team to “getter done.” 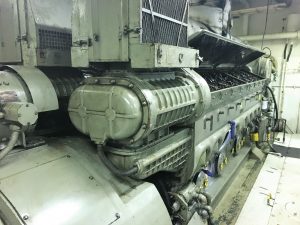 What makes JOIDES go? Seven (7) Diesel locomotive engine/generators. 16 cylinders each. Five engines @ 3,000 HP and two at 2,200 hp. They supply electricity to not only the entire ship but also to JOIDES two propeller shafts driven by twelve (12) 750 hp DC motors, six each per shaft 4,500 hp per shaft for a total of 9,000 hp. Each propeller is 13 feet (3.92meters) in diameter.  BTW it is hot as heck down below with the engines, the hand rails on the ladders and railings were hot and yes it is loud.

The waste heat (2nd law of thermodynamics right?) from the engines is used as co-generation energy to distill sea water for ships fresh water demands. JOIDES can produce 41,790 US gallons (150 tonnes) a day. Daily consumption of fresh water is 13,900 gallons (50 tonnes) a day. Storage 67,421 US gallons (242 tonnes). Minerals are added to the distilled water because humans can’t healthfully drink distilled water for long, thanks JOIDES.

What about the gray water from the sinks, laundry, and showers? Overboard. Sewage water goes to a biological treatment reservoir where nature’s microbes decompose the waste before it gets discharged. That is why the only thing that goes in the toilet is what came out of a human – the toilet is not a wastebasket. In sensitive marine areas a dash of chlorine may be added to sewage discharge. 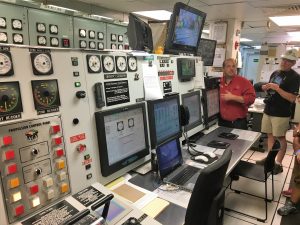 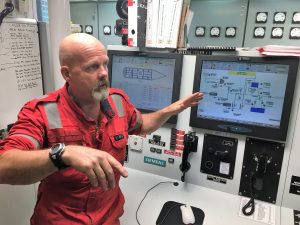 The ship is driven in the pilot house or bridge. On the tour we met Captain Skinner and 2nd mate Thomas Hart. The amount of electronics required for navigation, control of the ship, and Dynamic Positioning System for drilling is remarkable. Tom mentioned that all his free time is spent reading technical manuals and journals to keep abreast of the technology. I was humbled by both the Captain and 2nd mates quiet but determined manner. I was pleased that despite the long consoles of electronics, that paper charts and a simple clock with GMT time, were seen on the bridge for the “what if” moment when tradition trumps technology. Well I didn’t get to blogging about the drill deck – I’ll leave that to the next rock blogger. Good night! 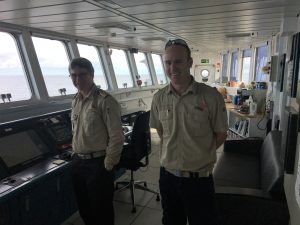