Co-Chief Karsten’s German Weekly Letter 5
You have been attacked by the sea monster! 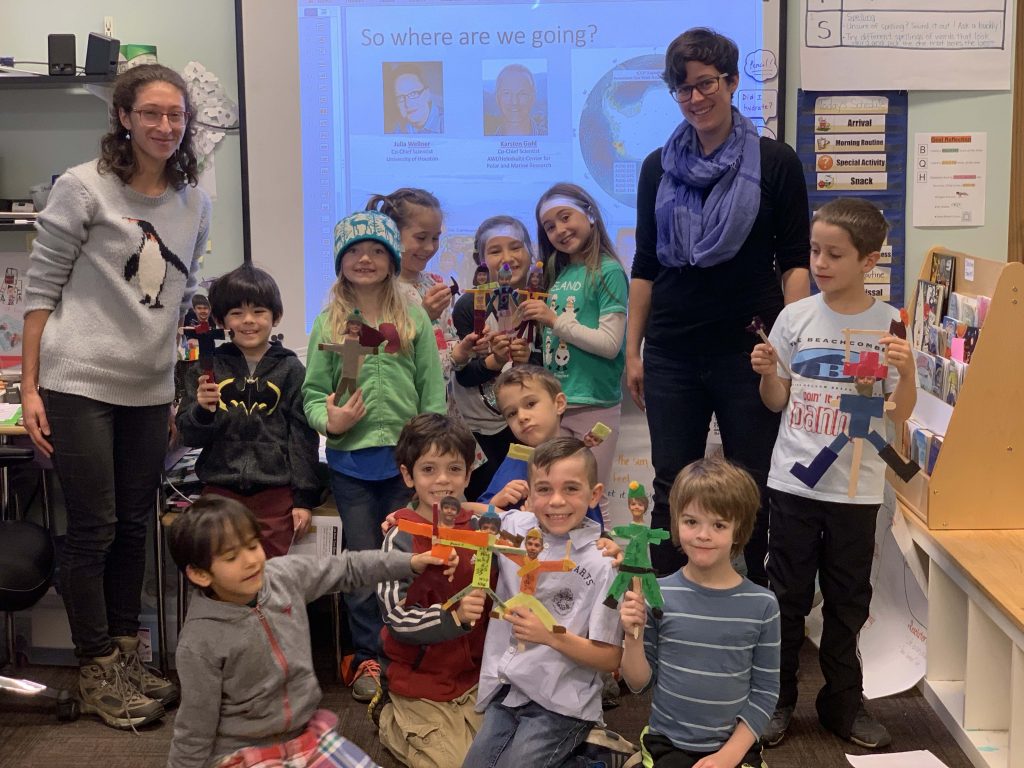 The very first time I visited classrooms and talked to kids about my research was in preparation for my current Antarctic expedition aboard the JR. Things escalated quickly, and now I have a stowaway group of kids in my suitcase!

I am a PhD student at University of Massachusetts studying ice-sheet dynamics; my role aboard the JR is sedimentology, collecting data about past environments in order to reconstruct the history of Antarctica with numerical models. My research spans reconstructing smaller ice sheets during past warm periods (millions of years ago!) to future sea level rise – which can be a daunting task to explain to adults, let alone kids, but fortunately I had support from the teachers to help me tailor a suitable presentation. I had met two teachers at a Boston play reading (an Antarctic-themed play, of course!), and I was also welcomed into my aunt’s classroom in Durham, NC – so I ended up visiting three groups of kids (2nd+3rd, 4th, and 5thgrade).

I was quite nervous to visit these classrooms… luckily, kids are full of natural curiosity, and asked some amazing questions about the expedition:

“Are there laws in Antarctica?”

Yes! Although no one owns Antarctica (lots of countries have tried to stake claims), most countries signed the Antarctic Treaty  in 1961, designating the continent as a “natural reserve, devoted to peace and science”. This means that it is one of the most environmentally well-protected areas on Earth! You’re not allowed to leave anything on the continent or take anything off the continent (anything not for science, that is). You’re also not allowed to bother the animals. This includes making loud noises, like breaking the sea ice with a boat, or collecting seismic data – but since sometimes those activities are necessary for science, you can get a certain number of hours allotted for these restricted activities.

“Did you touch a penguin?”

NO!!! That is a serious no-no, and would violate the Antarctic Treaty!

Well, it would be pretty dangerous to lean out over the boat railing enough to touch some sea ice, or to grab a piece and stick it in my mouth! But, if I could, it would still taste like regular ice. Maybe a teeny bit salty, but for the most part, when the top of the ocean freezes into sea ice, it is easier to freeze water molecules than salt molecules. This simple fact explains a large part of global ocean circulation, actually! Because when sea ice forms, it takes more fresh water out of the ocean than salt, so the remaining water underneath the sea ice is extra salty. This makes it super dense (plus it’s cold), so it sinks, creating a unique water mass that sinks to the bottom of the world’s ocean basins!

“Do you know the difference between girl orcas and boy orcas?”

I didn’t know, but the questioner did! She proceeded to explain to me that the difference can be spotted by how straight the upper fins are, and then used my photo as an example to point out the differences!

“So, if you can’t leave anything on the continent, where do you use the bathroom?”

Well, this is a fun one! The stations (and the boats, such as the JR) have their own wastewater treatment systems so that everything that gets discharged is clean. However, if you are doing field work at a remote site, it’s a bit messier – you use the bathroom in a bucket! During my last trip to Antarctica, when I was camping in the Dry Valleys, we had our own little bathroom area designated by a flag. If you were hiking away from camp, you used the ‘bathroom’ very carefully into a repurposed Nalgene water bottle! Then when you get back to camp, you empty it into the bucket. When the buckets were full, a helicopter came to cart them back to the base. Because, of course, if temperatures never raise above freezing, then all that stuff never gets the chance to deteriorate and get recycled into the dirt, like it normally would.

“Did dinosaurs ever live there?”

Yes! But they lived on Antarctica back before it was covered in ice. When there were dinosaurs in Antarctica, the continent wasn’t actually at the South Pole yet, nor was it truly a continent; it was still jumbled up with other land masses at the time. Since there wasn’t any ice there yet (the Antarctic Ice Sheet has been around for “only” about 30 million years), I don’t know too much about that part of Antarctic history.

One of the classrooms even decided to accompany me on my adventures! The youngest group (2nd+3rdgrade) made popsicle-stick figures with their faces (a sort of Flat Stanley!) – so that I could take them along with me on the JR: 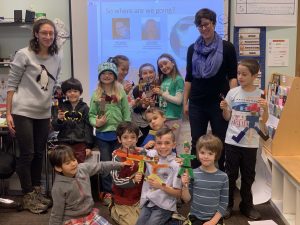 Of course I have been having lots of fun with these popsicle-stick friends. They captured the attention of other expedition members as well, who helped me pose them and photograph the popsicle stick students. One of these photos (of the kids boarding the gangplank of the JR, in Punta Arenas) was featured in our very first group meeting! 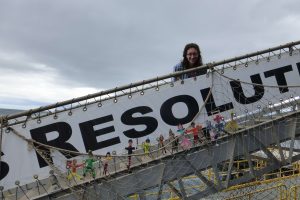 Here are the kids aiding in core description: 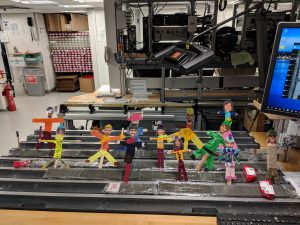 And also testing out the scanner that collects a high-resolution image of each core: 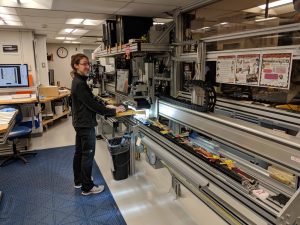 They also investigated the paleo lab, where scientists sieve samples in order to look for microscopic organisms that could indicate the age of the core or the environment of deposition. Mostly the kids were looking out the window, though: 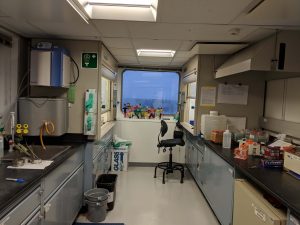 Then, they wanted out! So we donned hard hats and went out on deck for some fresh air. 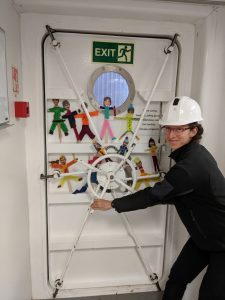 Thank you to Elena and the Acera school classroom for accompanying me on my adventure!