Nannofossil Discoaster – Wed, May 3
Cabin – May 4 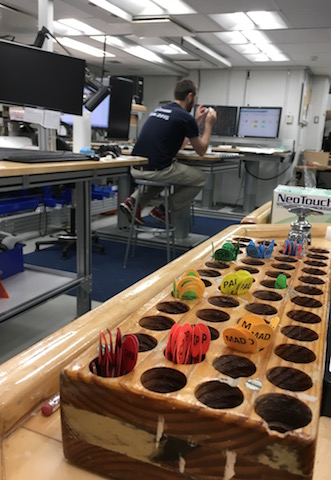 After the casing was installed a couple of days ago the coring team drilled down to the rock layers for a second round. This time the hope is to be able to get deeper into the rock layers because the casing (steel tubes) will stabilize the hole. Rocks are coming up on deck and this is exciting because it is the rocks that will help answer the questions in the scientific prospectus. 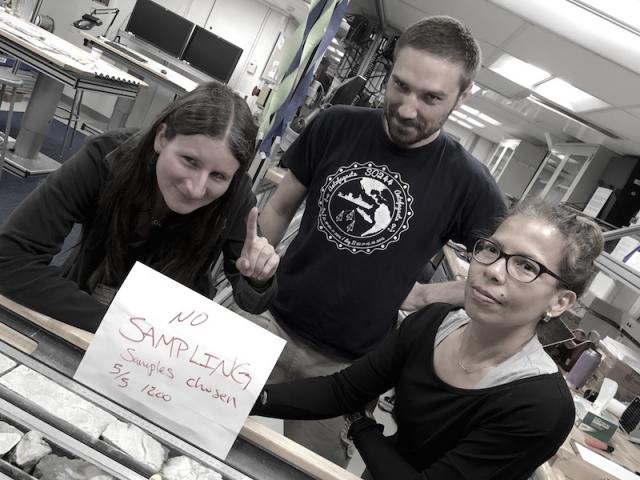 Now we get into the hard part. Pun intended. Rocks are hard that is plain to see, to cut, and to determine how they were formed. But they are also hard because there is not as much of them available and they are in high demand by all of the scientist both on this expedition and on land. When I went up for cross over meeting this morning in the core lab there was a large sign written in red “No Sampling, samples chosen 5/5 12:00.” (the time of the cross over meeting). This was to follow up on the email that came in around 10pm. All of this precaution is for a few good reasons. Most importantly rock is harder to retrieve than the fluffy sediment layers that seemed to go on full core after full core at the beginning of a hole. With this limited supply there are both the primary objectives of the expedition as well as post cruise research objectives to consider. A lot of people want this rock, their research depends on it.

All of the scientists have some idea of what a rock might be but to confirm or refute their hypothesis they need to test it by getting a closer look. Most of the time that involves grinding up a chunk of it for x-ray defraction or cutting a chunk off to make a thin section that can be further examined under the microscope. These are expensive techniques because it takes a lot of this precious rock out of commission. The Co-chiefs and Expedition Project Manager’s role is to make sure that an equitable and scientifically significant sampling is allowed and that requires a discussion with both the night and the day shift scientists. So the sign was a pause button until a fair discussion could take place at crossover and the science team could determine the best sampling plan. Until then there were a few scientists who were posted at guard over the rocks.

Now for the fun part. Crossover was more lively today than I had seen it before. Some of the rocks brought up in this core were also present in the previous core and some were new! After the determination of what rocks would be sampled from yesterday’s core the next freshly cut core was brought out to the working table and the archive table. This reignited a flurry of discussion and close examination of the new rock. Dare I say that this biologist is finally catching the rock lover bug. The Petrologists were finally happy but still restricting themselves to observations with minimal inference until further testing.