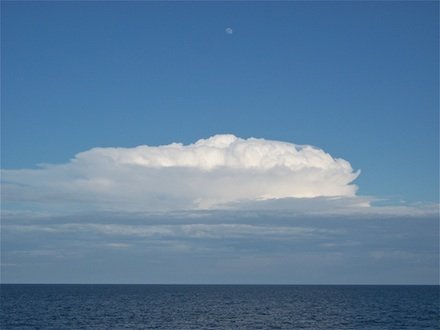 This morning, a huge cake-like cumulous cloud dominated the eastern horizon, topped by a gibbous moon.

Air temperature is 28 °C (82 °F) and the water temperature staying steady at 33 °C (91 °F).
A beautiful morning, and we are much closer to the island, Isla Del Caño, and also to Costa Rica’s Península de Osa, home to at least half of all species living in Costa Rica. Osa means “bear” in Spanish, although it is doubtful that any bears live there at this time (or ever??? I couldn’t find anywhere the origin of the name!). In the photo below, you can see the island in front and the Peninsula in the background, along with a flying Brown Boobie (On the Google map above, the ship’s location is the green arrow).

Scientists at Work
Sapropels!  From Wikipedia: a contraction of ancient Greek words sapros and pelos, meaning “putrefaction” and “mud,” respectively. And that pretty much says it all. Bring a nose plug to the sampling table! The sapropels are the red-brown sediments in this core section:

Sapropels are often deposited on the bottom of the ocean in something called an Oceanic Anoxic Event.  Anoxic means “without oxygen” which usually indicates that the ocean currents are not circulating the deep water very much or that lot’s of little organisms (plankton and algae) are using up all of the oxygen before it can make it to the bottom.  Sapropels are unconsolidated dark-colored ooze in salt or fresh water made of putrefied plants or algae that washed into the water from the land or just fell to the bottom of oceans, swamps, and lakes.

In geology, they are usually darker-colored clayey sediments rich in organic matter that smell like “putrefaction” and “mud.” And we brought them into the lab on the ship…

Scientists also pointed out areas in today’s cores where the greenish mudstone contained layers of sandy volcanic ash, and also fairly large layers of turbidites, which come from sediments that were repeatedly disturbed by multiple underwater landslides or “avalanches.”

These underwater landslides could be triggered by earthquakes generated at a convergent plate boundary, like the one we are studying on this expedition.

Life on Board
We had two birthdays today, and so the cooks made two cakes!  We celebrated with both Physical Properties Specialist Liz Screaton and Inorganic Geochemist Ken Heydolph.  One of the cakes was shaped and colored like a sediment core!  I have never seen greenish-gray and black frosting before.  Yummy!

I customarily go for a walk around the helicopter landing deck for 30 minutes or so before dinner to get a little exercise after mostly sitting all day at the computer.  It is fairly common to see pods of dolphins “porpoising” through the water here, but today I actually saw them leaping out of the water and flopping back into the water on their sides.  Sea World in the Real World! It was pretty cool.

From the Caribbean plate, above the subduction zone…