Happy Thanksgiving! (with bits of core here and there)
Sapropels Smell! 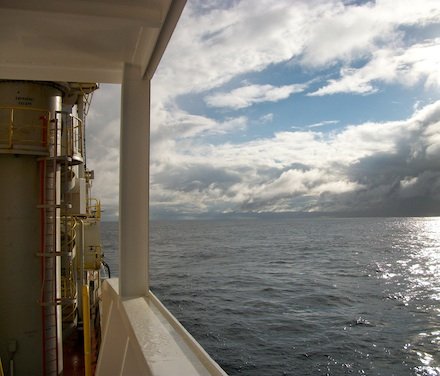 A beautiful morning off the Foc'sle Deck, looking northeast…

Scientists at Work
In the Science Report Updates that are sent out throughout the day, an acronym that is often used is “POOH.”  For example:

After asking several people that didn’t know what it meant, someone was finally able to tell me:  POOH means “Pull Out Of Hole.”

As of 8:30 this morning, hole conditions were not particularly good and they continued to try to retrieve core through a problematic area, with some success.  They continued drilling down to 300 meters below sea floor (mbsf), and then were able to retrieve 22 meters of core between 300 and 358 mbsf.  Scientists were happy when the brownish siltstone core was put onto the sampling table.

They found different colored areas of carbonates (called “glauconites”) in some of the cores. Later, the cores that came in were a greenish-gray silty clay with some dark ash layers, and included calcareous ooze with nannofossils and diatoms!

Preliminary inspection of these nannofossils shows that the cores at the bottom were from the Pleistocene Age, about 2.6 million years ago to about 12, 000 years ago, and the cores at the top were from the Miocene Age (about 23 to 5.3 million years ago).  This is called a “reversal,” showing that somehow the layers in the plate shifted and the older fossils ended up on top, perhaps due to an earthquake or fault zone.

A meeting was called in the Conference Room today so that the scientists could discuss the decision as to if we should try to continue getting core at this very unstable hole where we have been working, or to move to the fourth planned site off the toe and collect cores there.  After much discussion, it was decided to fill in this hole, go to the fourth planned site, then come back to this area if we have time after the fourth site.  The reason that this is a big decision is that this third site is very important in determining the mechanics of earthquakes at the plate boundary below us.

Life on Board
The crew team has to have medical emergency drills, as well as fire drills and pirate drills like the rest of us. During one of these drills, ship physician Gene Molina took care of a (staged) medical emergency in his examination room.

Movin' along to a new site and a new morning…from the subduction zone, west of Costa Rica