Piha Beach is located on the west Coast of Auckland. We looked at eroded remnants of underwater slopes of stratovolcano that look 16 million years old. Rocks are cut by faults and joints and we can see where the joint has caused a slab has fallen off and created platforms.

We hiked up a mountain to Tasman Lookout.
The beach has a high iron content, which is of volcanic origin and is Magnetic!

There is a cobble conglomerate with a granular matrix of surrounded and subangular rocks. Many igneous rocks with vissicles are present here. It looks like poorly stratified volcorudite. There is a lot of evidence here of this place being an underwater volcano: deepwater forams, laminated sands and mud, and pillow lava. 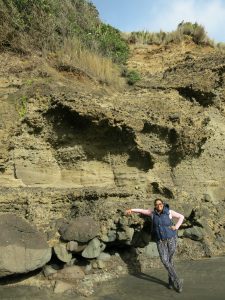 There is evidence here of salt weathering in the rocks. This is called a Tafoni Formation in Sedimentary Rock which shows a Honeycomb-Like network due to weathering from the waves.

Site #2: Karekare
There were many volcanic conglomerates. There is evidence of longshore drift here thats causing the sand to move north up the coast.

We walked over to the sand dunes. The sand here is so fine and silt like. Then we saw flow banding on the igneous rocks. There is a lot of dacite here in this area.

There was also stratified conglomerate monogenetic rocks here. There is autobrecciated lava flow here. There is evidences of volcanic vents and craters and there are even air shaped bombs along the coastline.

The sand here was also magnetic!