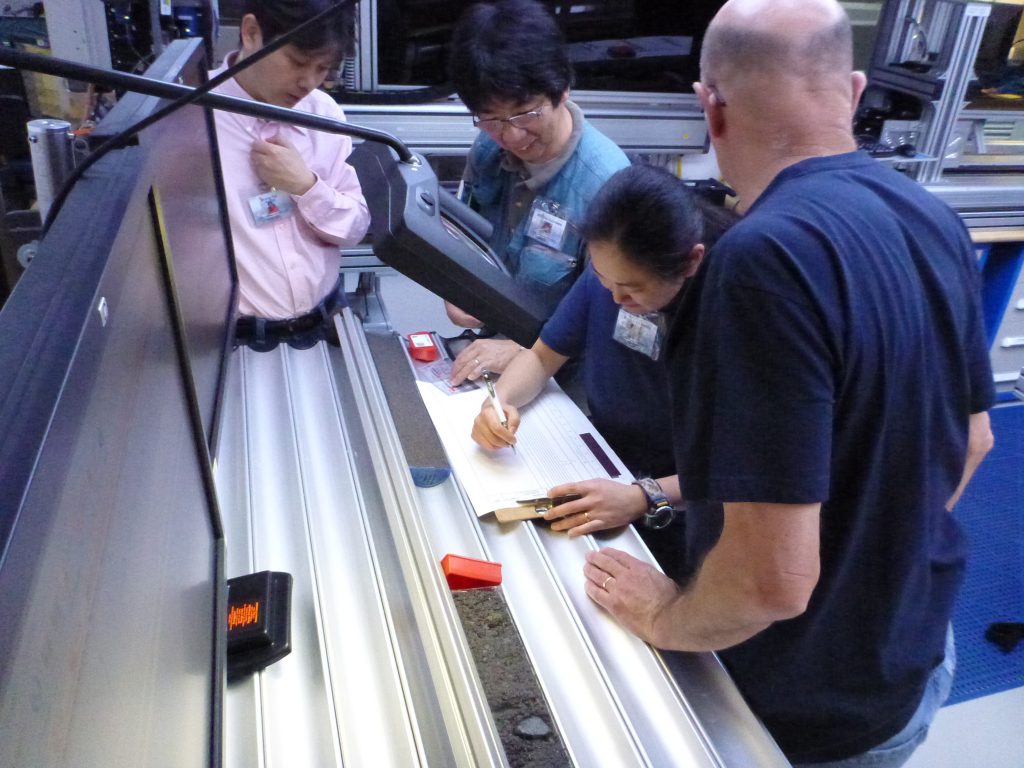 Science results as summarized by Staff Scientist, Nicole Stroncik. We started our fourth week in the middle of our coring operations on Site U1398 (CARI-09) and ended the week with preparation for our logging operations on Site U1399 (CARI-08B) west of the island of Martinique. Site U1398 is located ~50 nautical miles west of Martinique while Site U1399 (CARI-08) is ~12 nautical miles east of first location. Site U1398 was chosen to characterize the sedimentation processes in the back-arc Grenada Basin, to identify the turbiditic sequences related primarily to debris avalanche deposition versus those related to non-volcanic processes. Read on for more findings from this week's sampling. Thank you to Expedition 340 scientist Tatsuya Adachi, Endo Daisuke and Anne Le Friant for generously sharing their photos for this blog.

Two holes were cored at Site U1398 in water depths of ~2900 meters. The target depths for drilling were reached for each Hole, 263-269 meters below seafloor. Cored material was obtained to study the main objectives of the site. Generally, both holes are composed of alternating sequences of thick, massive, mainly normally graded volcaniclastic turbidites divided by relatively thin layers of hemipelagic sediment and hemipelagic mud interbedded with multiple thin tephra and turbiditic layers. Pumice clasts are present throughout both holes. The differences in the characteristics of the sampled turbidites are highly indicative of differences in the emplacement processes of these sequences. A total of 64 cores from Site U1398 were retrieved and about 300 meters of material recovered.

This week we also started coring and logging operations at Site U1399. This site was selected to characterize the processes accompanying debris avalanche emplacement and associated erosional processes. In detail, we hoped to be able to characterize and quantify the erosional processes of the upper sedimentary layers deposited in the Grenada Basin associated with debris avalanches and their subsequent incorporation into the debris flow. The seismic and bathymetric survey for site U1399 revealed that this site is located on one of the main debris avalanche deposits and that coring at this site will most likely retrieve volcanic and biogenic sediments with intercalated, large, chaotic debris avalanche deposits.

We reached our depth objectives at Site U1399 for one hole and retrieved material that allow us to address the main objectives of this site. Generally, both holes at Site U1399 are composed of turbiditic sequences and tephra layers interbedded with hemipelagic sediments. The thickness of the turbidite and tephra layers is variable and grain size varies throughout the cored volcaniclastic sequences. At the base of Hole U1399A, lithified hemipelagic sediments were recovered. In contrast to our previous sites, the sediments retrieved at this site show signs of intense deformation throughout the entire cored interval, except for the basal un-deformed layers of lithified hemipelagic sediment. This clearly indicates that we achieved the main coring objective of this site – to retrieve an entire sequence of the chaotic deposit and the transition zone between the chaotic deposit and the normal marine sediments as well as the upper part of the normally bedded marine sediments. A total of 62 cores from Site U1399 were retrieved and about 400 meters of material recovered.