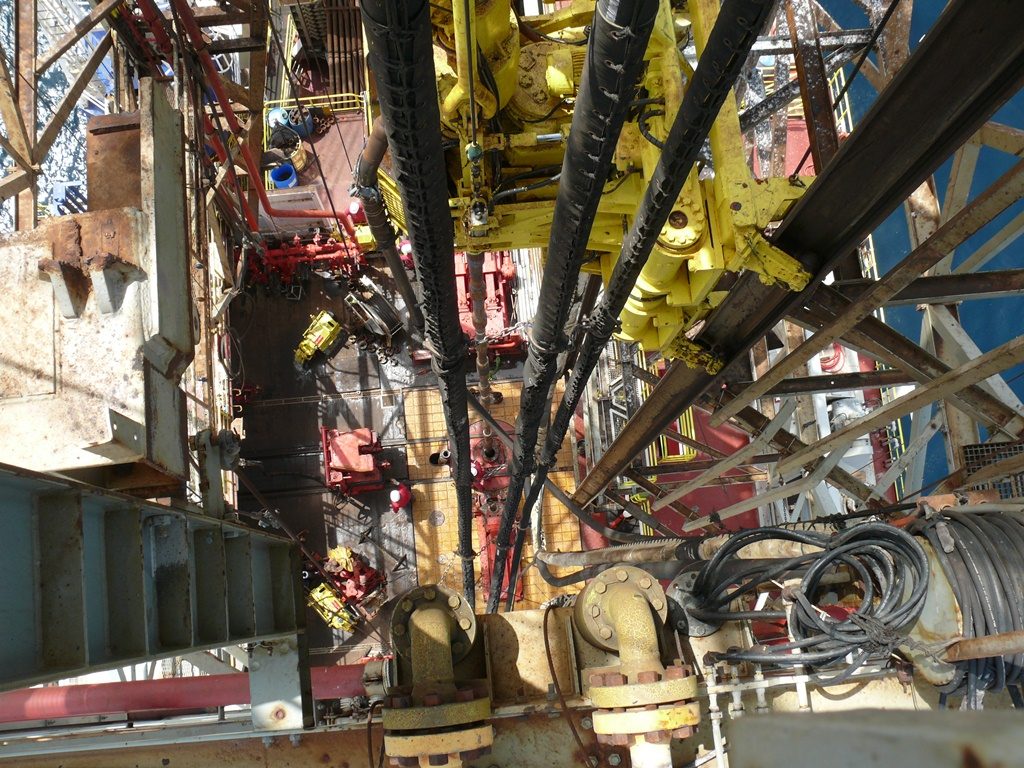 Science results as reported by 340 Staff Scientist, Nicole Stroncik. Week 5 started in the middle of our logging operations on Hole U1399C (CARI-08B), a dedicated logging hole, and ended in the middle of our coring operations on Site U1400 (CARI-07C) west of Martinique. Logging of Hole U1399C was conducted quite successfully. Not only were we able to run the triple combo and the FMS sonic tool strings, but we were also able to run the VSP for the planned seismic experiment. The quality of the obtained in situ physical property data (magnetic susceptibility, natural gamma radiation, resistivity, seismic velocity) is generally high. These downhole data will, after a calibration of these data with the material cored, allow us to interpret the parts of the different holes where core recovery was low and derive a more complete lithostratigraphy. Teaser photo credit, Etienne Claassen, 340 Marine Instrumentation Specialist

Site U1400 was chosen to characterize debris avalanche emplacement and associated erosional processes. The evolution of the active Montagne Pelée volcano on Martinique is characterized by three major flank collapse events (~ 0.1 Ma, ~ 25,000 y, ~9,000 y), which systematically destroyed the western flank of the volcano. The volume of material displaced by these collapses varies from 2 to 25 km3. The produced debris avalanches traveled into the Grenada Basin. In addition, at 0.3 Ma the Pitons du Carbet volcano experienced a sector-collapse. As interpreted from the seismic profiles obtained during several pre-expedition surveys, this site will penetrate through volcanic and biogenic sediments with thick intercalated chaotic units.

Due to challenging hole conditions, we were not able to reach our depth objective of 510 mbsf at any of the holes at this site. Hole U1400A was abandoned after the drill string became stuck at 51 mbsf. We abandoned Hole U1400B at 213 mbsf after the core barrel became stuck in the BHA. Nonetheless, the core material recovered so far from 0 to 213 mbsf in Holes U1400A and U1400B will allow us to address the main scientific objectives of this site.

Generally, this hole is composed of alternating sequences of thick, hemipelagic sediment units and thinner, volcaniclastic sand layers, with interbedded multiple tephra layers. The consolidation stage of the retrieved sediments is much higher than observed at the other sites and the proportion of volcaniclastic sand is much lower. The sediments retrieved at this site show signs of intense deformation throughout the entire cored interval and steeply inclined bedding of the sedimentary layers. This clearly indicates that we achieved the main coring objective of this site – to retrieve sequences of the chaotic deposit.