Ginny Edgcomb: Searching For The Fungi of Guaymas
The Origin of Life, And Other Stories 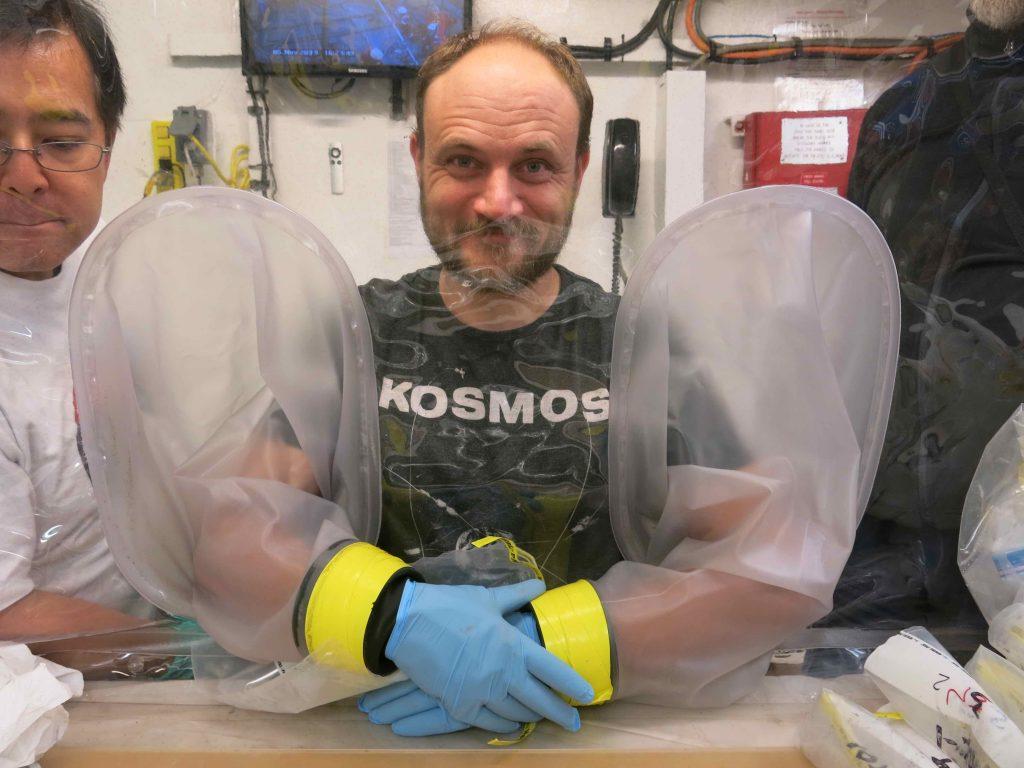 The day passes pleasantly while we are doing two things: 1) waiting for the Mexican permit to drill on the Sonora Margin, and 2) drilling deeper and deeper into Ringvent. This project, originally not much more than occupational therapy, is now developing a life of its own and getting more and more interesting. Drilling is going extremely well and now, ca. 100 meters into the sill, cores of previously unseen quality are coming up…

Here, Nicolette is looking in surprise at very beautiful veined cores… not the pebble-sized rubble that we have seen all too often, but big, coherent core sections. Plans are made. Ambitions are growing… MUST SAMPLE!

Glistening veins of carbonate and trapped sediment, golden pyrite layers, snow-white calcite crystals… the basaltic sills of Ringvent are back again and charm the science crew with their solid presence and mineral glitter.

However, the most desirable sections have naturally many admirers who would like to have samples. A sampling coordination ad-hoc committee is sitting in deep thought and gazing at photos of critical core sections… here we have the tricky task of mediating between microbiologists who need homogenized sample material, and Martine & Chris from Sedimentology & Physical Properties who would like to have intact subsamples preserved. A close inspection of the rocks in question, kept under nitrogen in the anaerobic glove box, is scheduled to bring everyone on the same page. Meet the microbiologists at 3 p.m. at the globe box!

And now to the cross-dressing part… Tobias Höfig, the card-carrying mineralogist and lab host of the JR, and physical properties wizard Christophe Galerne (a mineralogist in his former scientific life) sit down at the anaerobic glove box and experience firsthand la vie microbiologique. They stay there for two hours, taking photos of their favorite rocks before some of them will get smashed… pardon, subsampled. Here, Christophe is channeling his inner anaerobe (top photo).

And Tobias has his epiphany… so this is where the microbiologists spend so much of their time! Wouldn’t is be nice to install a rock saw or a thin section work bench inside one of these?

PS. Yes, my camera is inside the anaerobic globe box, taking ca. 560 megabytes of photos for 3D reconstructions of veined rock images.

Outside it is actually raining – in the desert and over the Gulf of California ! Followed by the most intense Norwegian sunset in Edvard Munch’s “the Scream” color scheme.

This blog post first appeared on Nov. 5 on my daily blog of EXP385. Make sure to go to expedition385.wordpress.com to read the latest updates of this expedition!