Why Sedimentology Rules!
Hands-on Ways to Visualize the Earth’s Layers 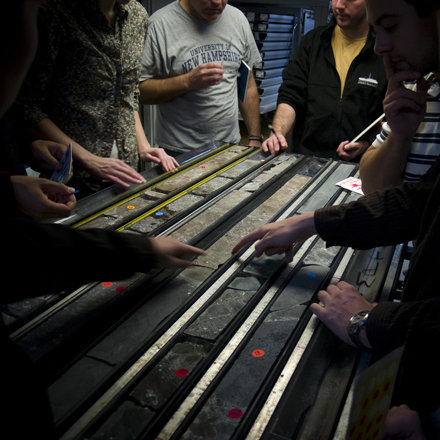 The inside of a seamount is not the same from top to bottom. If it was the same, there would be no need to drill into it. We could just scrape some rock off the top of it and that would tell us everything we would need to know about the inside of the seamount and how it was formed. A seamount is not homogenous, though. It has numerous layers, kind of like a lasagna, and those layers contain a great deal of complex history.

Let’s say that you found an ancient lasagna in your refrigerator and you were really hungry, but you also had some food allergies, so you didn’t want to eat it until you knew every ingredient that was in it. More than likely, you would say, “The heck with this!” and drive to the grocery store, but it also turns out you have no money and someone stole your car. If all these conditions to give my analogy a reason to exist were not too depressing and you were determined to eat the lasagna, then you would have a lot of work ahead of you. You could cut a slice out and identify and describe the layers of meat, vegetables, cheese, sauce and noodles. This could tell you what kind of lasagna you had and, if it was just meat or just vegetables, allow you to infer what might be the origins of the lasagna, but would not tell you everything you need to know. If there is meat, you may need to look at it under a microscope to determine whether it is one kind of meat or a sausage consisting of numerous ingredients. You probably want to do the same with sauce. You also probably want to do a chemical analysis of all the various layers to determine what their individual ingredients may be. You may assume that you can do a chemical analysis on just one layer of noodles because the rest are probably the same, but what if the cook switched brands in mid-lasagna or had their hands contaminated with some other food item that then found its way into the lasagna? You would then want to be sure you did a chemical analysis for each separate layer. You also may want to have a microbiologist look to see if any organisms have turned the lasagna into a habitat and also a sedimentologist to see if dust has collected on the top of the lasagna since the lasagna was first formed.

If this is the work you would do to learn the origins and chemistry of a lasagna, imagine the work that is done to describe and interpret a 70 million-year old seamount. A seamount is much more complex in its layers than a lasagna, which is why we have 30 scientists onboard right now studying the core samples. By describing each layer in all its complexity, the scientists can better understand the origin and evolution of these seamounts.