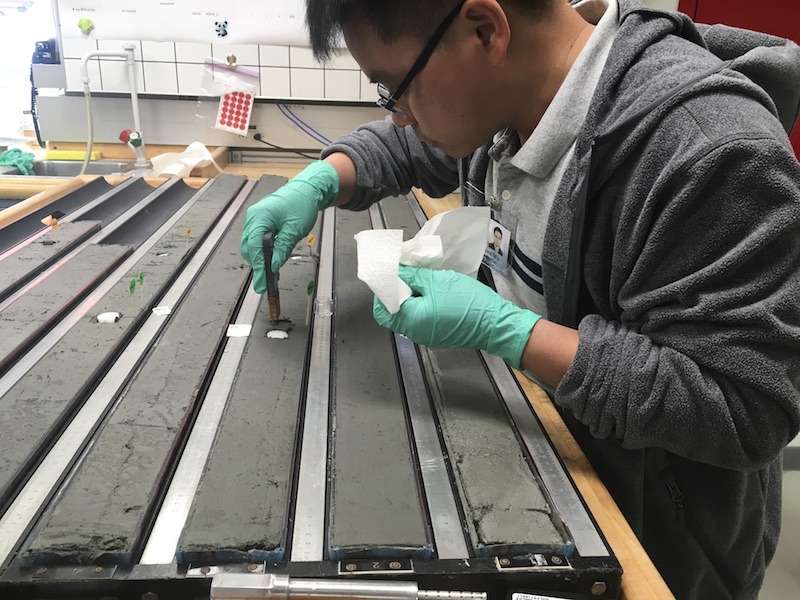 Today the labs of the JOIDES Resolution have come alive again! The catwalk, where the cores are delivered after they are brought up from the seafloor, was full of anticipation from the scientists in waiting.

The night shift had gotten up early and the day shift would not go to bed as  they waited for the first core retrieval of the expedition. It was expected at 22:00(10 pm) and by 00:10 (12:10 am) early morning we heard what will become a familiar call “core on deck” over the PA system.

The science party had spent days preparing and calibrating their equipment and observations and sampling methods as well as learning how to run various equipment in the lab. They learned from each other and from the excellent laboratory support staff from the IODP program. On this boat there is state of the art equipment including my favorite, the great and powerful Super Conducting Rock Magnetometer, which if you can say 10 times fast you have accomplished something, but as I learned, there is much to understand in order to grasp how this machine functions and to interpret the data it produces.  Stay tuned we will be discussing this Super Conducting Rock Magnetometer again soon! Other super tools in the geologist repertoire include hydraulic presses, p-wave analysis machines, and natural gamma ray machine, and electron microscopes! Despite the impressive machines and sensors there is still a distinct need for a trained eye, team consensus, and our old friend the compound light microscope. For this we visit the Sedimentology team.

When I visited them yesterday I came across a calibrating discussion between the scientist. They were working to standardize their methods for observing the relative percentages of one grain size group to another and to give detailed analysis of the contents of smear slide samples taken from the cores. This would help them better describe what was in the layers of sediment found and piece together the story of the South China Sea, its climate and sea levels in the geologic record. Because I had taken a soil science course ages ago I wondered aloud if they were able to get enough sample of the core to use the classic texture by feel method to estimate amounts of clay, sand, and silt in the soil. “Well no, but it is easy to tell if you just eat a little bit of the mud.” Julie Schindlbeck told me. Turns out, that is thing with Geologists. Sediment sampling by mouth. The biology major in me thinks, again out loud, of course this makes sense because you probably have more nerve endings on your lips than your fingers. However, to a geologist it comes back to minerals and the Mohs hardness scale and whether or not what is in you mouth is scratching you teeth!

You see, your teeth are made of apatite a phosphate mineral that is harder than minerals that typically make up silts and clays but softer than minerals that make up sands like quartz. If you put the sediment in your mouth and it feels grainy and crunchy, imagine your younger years with a mouthful of sand in the play ground, then it is likely more sandy than silty or clay. Clay will have no crunch to it and will feel like silk and silt will be only slightly gritty in feel. This is not however a recommended past time as you can imagine chomping on sand might well wear away all of the apatite of your tooth enamel. Also it is good to mention that this method would not be employed on the JOIDES Resolution due to the bacteria levels from deep sea samples. In fact, as was also recounted to me by Schindlebeck, this is why so many people in early agricultural societies were missing their teeth because they would grind their flour with sand stone grinders that were made up of fine grains of quartz. This discussion went on for a while with the other sedimentologists describing how various smells and tastes can tell you a lot about the samples you are working with. So much discussion occurred that it attracted a near by Petrologist (a person who studies rocks), David Peate, who very matter of factly summed up the discussion with an agreement, “Sometimes you just need to get down and lick the rocks!” 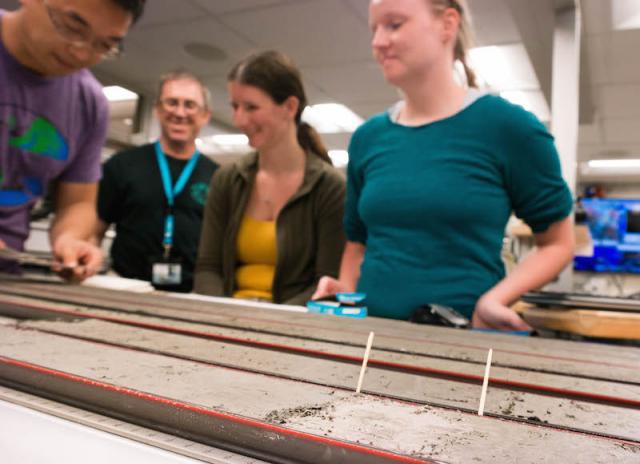