Setting Up, Southern Ocean and Birthday

On Our Way!
Arriving in New Zealand 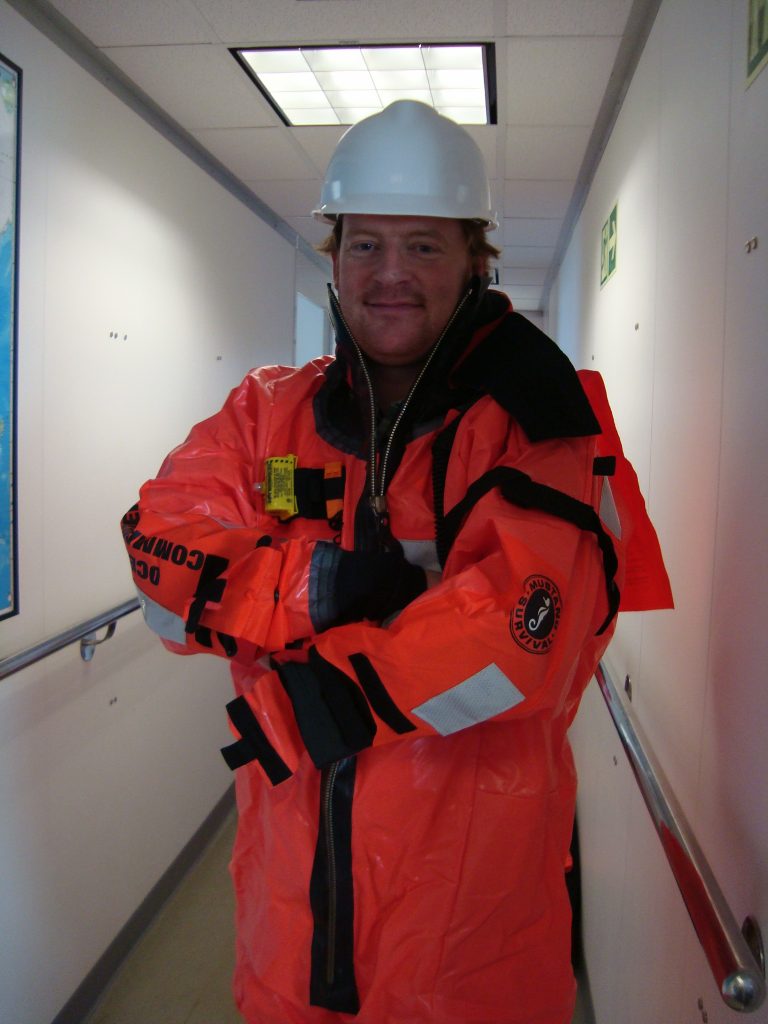 Last couple of days have continued the hectic pace we’ve had since the start. Worked 14 hours both days!

Lots ‘o meetings about the science, sampling strategies, safety in the labs, core processing, outreach etc and the life boat drill (the picture above shows me in a survival suit for the boat drill). In between the meetings I’ve been getting my corner of the chemistry lab set up for biomarker analysis.

The work I’m doing is not routine and it’s been a while since it’s been done on the ship, so the apparatus and glasswear had been packed away. It’s taking a while to unpack, go through it all and get set up. My work it very vulnerable to contamination – so all the dusty equipment and glasswear has to be painstakingly cleaned with acids, solvents and/or combusted.

The Southern Ocean:  Last night the ship moved out, away from the relative  shelter of New Zealand’s southern island, and into the Southern Ocean. The Southern Ocean is the encircling water between Antarctica and the southern ends of continents which lie to the north (Australia, Africa, South America). The prevailing westerly winds at these latitudes sweep the ocean water in a perpetual vortex around the Antarctic. It’s a raceway of dark blue, foam flecked, stormy waters.

One effect of the consistent strong winds is that they mix up nutrients from the deep to the surface. This constant supply of nutrients means the waters team with plankton and all the fish, seals and whales that feed on them (and above the birds). Turns out we hit the Southern Ocean swell precisely during the 30mins I was using the treadmill in the gym last night! Normally running on a treadmill is boring, but trying to stay balanced kept it interesting!

Birthday:  It’s also my birthday today. I used the ships phone (satellites are a wonderful thing) to talk to my wife and oldest boy George and opened their cards and the present I took with. They read out the other cards that had arrived in Glasgow. Then at 3pm I was asked to come downstairs to the mess and was surprised with a birthday cake and card from all my shipmates. Thanks everyone at home and on the ship for wishing me happy birthday.

What’s the food like?: Nachos…hmmm..nachos for lunch yesterday (with chunky guacamole). Red snapper today at lunch. A birthday cake.

Quote of the day: Lisa Tauxe’s advice to colleagues working on sampling the cores during rough weather.. "don’t barf on the cores"

What’s on the lab stereo?: Far Far Away” by Wilco and Cold Roses b. Ryan Adams (start as you mean to go on).