Sort of a Dreary Day

The Scientists Are Very Busy!
Rain Rain Go Away! 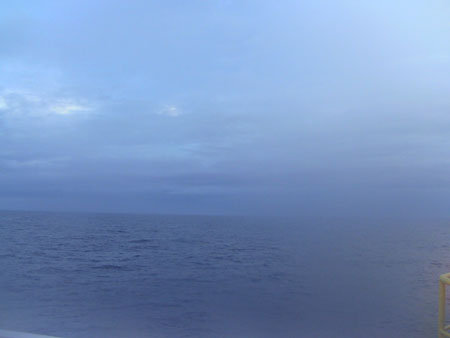 We woke up to a rainy day today but the drilling continues rain or shine. The crew is currently drilling site U1365D, which is the 4th hole at this first site. We will move on to another location when the coring of this hole is done. Chert has been found in all of the cores and it presents a bit of a problem in recovering complete cores. The first photo below shows some of the chert within the sediments. Remember, chert is a hard substance; it is made of quartz.

Rob Harris, a scientist from Oregon State University, is interested in the physical properties of the sediments and in the solid basalt basement rock. He is particularly interested in hydrothermal flow, hot water flowing through the ocean floor materials. In the photos below, you can see Rob taking measurements of resistivity. This equipment measures how easily electricity flows through the sediments and is seen in the foreground. The probe in the background is a thermometer. Temperature is a major factor in the resistivity of the material so it must be measured and taken into account when interpretation is done.

Hydrothermal fluids can flow laterally away from spreading centers through older and older basaltic seafloor. Many scientists believe that the fluids are blocked when they reach basalt that is older than 65 million years but Rob thinks that the fluids can move through the older rock and he is on Expedition 329 to test his hypothesis. This is what science is all about.