Splitting Core…and Peering Back in Time 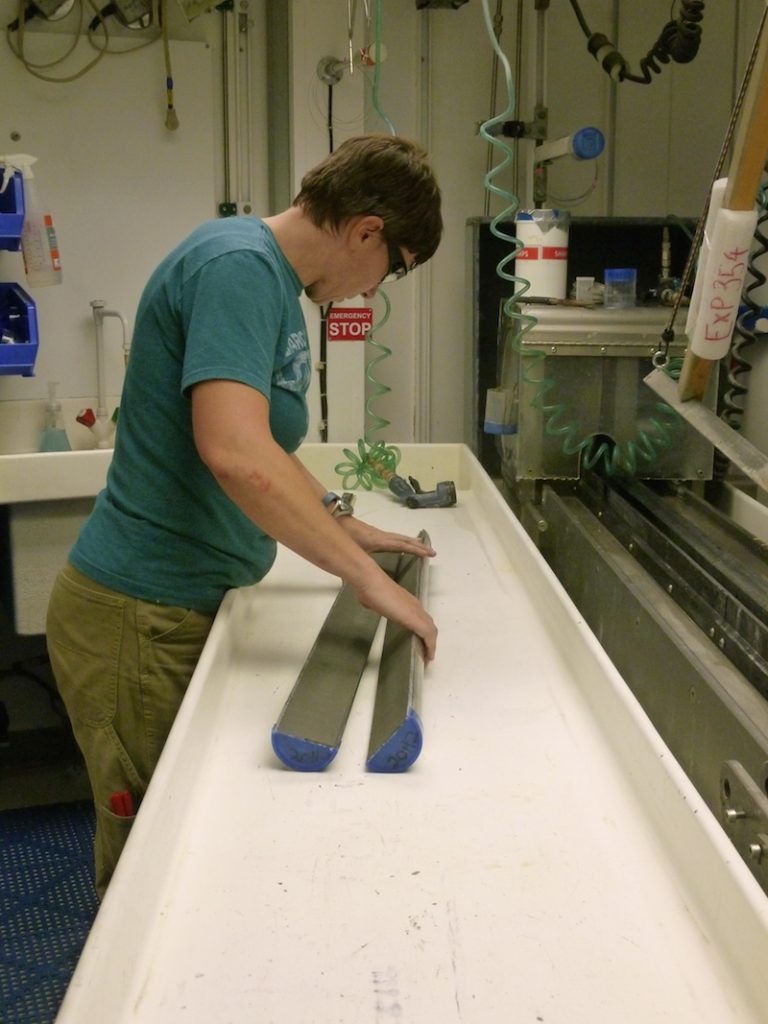 Once core has come into the labs, adjusted to room temperature and pressure (this can take a few hours), and passed through a series of tracks that measure the physical properties of the whole core, it’s time for the cores to be split in half.  The Bengal Fan scientists are eagerly waiting to get their hands on the core and see what’s inside.

There are two different ways to split core on the JOIDES Resolution.  For harder sediments and rocks, the IODP technicians use a water-cooled diamond saw blade.  But on this expedition, we are dealing with relatively soft sediments, so we’ll be using the razor and wire splitter.  The cores are placed in a grooved track on the cutting table and held in place with a bar that rests on top.  The motor-controlled cutting tool slowly moves down the length of the core. This tool has two hooked razors that split the core liner – the plastic casing around the core – and a thin, taught wire that slices through the core horizontally, much like a big cheese slicer.

Then comes the moment of truth – a quick tap on the table and the core splits in two, giving the scientists their first glimpse of sediments that have been buried beneath the Bay of Bengal for millions of years.  One side of the core is called the “working” half.  Here, the scientists will carefully poke and prod, taking many samples, to measure both onboard and onshore, for geochemistry, paleomagnetism, micropaleontology and other key studies.  The other side is called the “archive” half.  This side isn’t touched – it is simply photographed, described and stored so that a pristine record of the core is available to future scientists for years to come.  Who knows?  Maybe one day you’ll visit one of the IODP repositories  – where the core is stored – and look at the cores we are collecting!